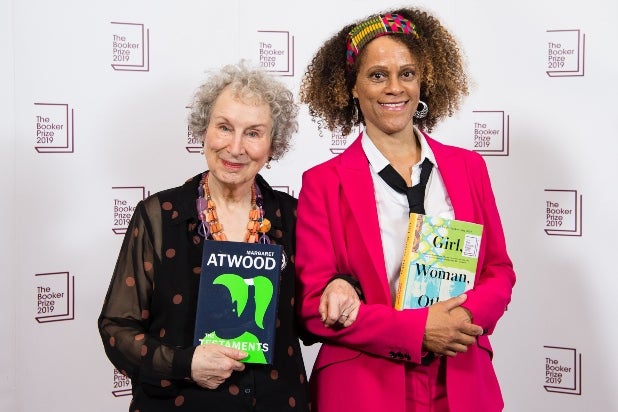 Margaret Atwood and Bernardine Evaristo are sharing the 2019 Booker Prize in literature, as the judges were unable to choose between Atwood’s “The Testaments” and Evaristo’s “Girl, Woman, Other.”

“We were told quite firmly that the rules state you can only have one winner,” Peter Florence, the chairman of the Booker judges, said at a news conference on Monday in London, according to the New York Times. But in the end, he said, the “consensus was to flout the rules and divide this year’s prize to celebrate two winners.”

Atwood last won the award in 2000 for “The Blind Assassin.” Evaristo is the first black woman to win the Booker Prize. “I hope that honor doesn’t last too long,” she said in her acceptance speech.

“The Testaments” is the sequel to Atwood’s 1985 classic “The Handmaid’s Tale.” The novel has been adapted into a popular Hulu series of the same name starring Elisabeth Moss. The streaming service also has plans to develop “The Testaments” into a series.

This is not the first time the prize has been divided in two, though it’s been quite some time. The last time judges purposefully broke the rules was in 1992 when they gave the prize to both Michael Ondaatje’s “The English Patient” and Barry Unsworth’s “Sacred Hunger,” the Times also reported. Before then, the last time it was divided was in 1974.

In any case, this year, Britain’s most prestigious award in literature will again be split by Atwood and Evaristo — including the 50,000 pound ($63,000) cash prize.