Maria Bakalova on Her ‘Completely Insane’ Journey From Bulgaria to ‘Borat’

TheWrap magazine: ”I thought, ‘Nobody is going to be giving a platform to an Eastern European person with an accent — forget about this, it’s just a dream,'“ says the Golden Globe and SAG-nominated actress

A version of this story about Maria Bakalova first appeared in the Actors/Directors/Screenwriters issue of TheWrap’s awards magazine.

When she was 11 or 12 years old, Maria Bakalova used to draw pictures of the Hollywood sign on her desk at school. She’d been involved with the arts since she was 6, when she began taking piano lessons and flute lessons and, she said, “any kind of music lessons.” But in her preteen years, her ambitions began to change, and she focused on the movies. “I felt like this was not enough,” she said. “I want to do something more. I want to dig deep inside myself. And I started to dream about being a big Hollywood actress.”

Mind you, she wasn’t doing this at a school with a history of sending its graduates to Tinseltown — she was doing it, and dreaming of becoming a glamorous star, in her home country of Bulgaria. But as she matured, reality set in. “When I grew up a little bit, I thought, ‘This is never going to happen,'” she said. “‘Nobody is going to be giving a platform to an Eastern European person with an accent. Forget about this, it’s just a dream.’ And I focused more on Danish cinema, Russian cinema, Italian cinema — the cinema that was around me.”

She laughed as she told this story, and for good reason. Bakalova was talking from a house near Beverly Hills in Los Angeles, where she’d been spending almost the entire pandemic — because somewhere along her path to a more sensible, less starry-eyed future, this little girl with a taste for Russian literature and a dream of stardom actually became a big Hollywood actress, with nominations from the Golden Globes, the SAG Awards and the Critics Choice Awards.

She did it with the kind of break they wouldn’t talk about in any acting school, when Sacha Baron Cohen took note of her improv skills and comic timing, cast her as his daughter Tutar in “Borat Subsequent Moviefilm” and put her in the hotel room where Rudy Giuliani did the shirt-tuck seen round the world. It helped make her a Golden Globe and SAG Award nominee, as well as a believer in not abandoning those childhood dreams quite so easily.

It’s not that Bakalova was really prepared for the Sacha Baron Cohen style of filmmaking, where he creates characters — a Kazakhstani journalist named Borat Sagdiyev; the daughter he keeps in a cage and plans to give to a prominent American politician to curry favor — and puts them in situations with unsuspecting people to make often disturbing points about American society and culture. But since the age of 12, she had studied and performed in theater, where, she said, “if you make a mistake you have to escape and keep going, because you don’t have a second take.”

Her manager told her that a top-secret project was looking for an Eastern European actress who could be funny and was over 18 but could pass for 15 or 16. “We heard that they were looking for a lead actress in a Hollywood movie, and I was like, ‘This is completely insane, it’s not possible,'” she said. But on a whim during a two-hour break before she had to report for work on a Bulgarian film, she made a tape and sent it in; within a few hours, the casting director got back to her and asked for a Skype call.

“I had no service because we were shooting in the woods, so I asked the producers to drive me to the nearest city with WiFi,” she said. “I jumped on a call with them, and they explained that it was a great project, but they cannot tell me about it because it’s a secret. And then a few weeks later I traveled to England and met Sacha, and that’s how all of this magic started.” 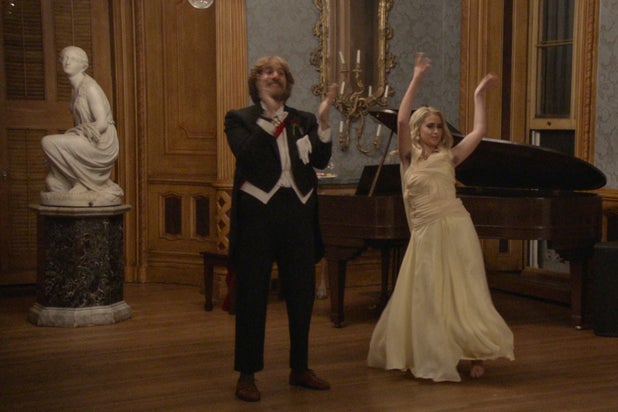 That magic began with an audition in front of an elderly couple who had no idea that the Kazakhstani gentleman and his daughter were improvising actors. “They were the sweetest old couple,” she said. “And they were super-empathetic to Tutar, who I think didn’t even have a name yet. Sacha was brilliant, as usual, and I was trying to do everything — washing my face with the water in the toilet, wondering what the air conditioner was, seeing the microwave and thinking it was a TV and trying to eat the fish from the aquarium.

“And I felt comfortable. I was scared, of course, because you have no idea how people are going to react, but it’s extremely addictive. And when you have a partner like Sacha, it’s the best thing ever.”

She knew who Baron Cohen was through the Showtime series “Who Is America?” and the movie “The Spy,” but opted not to delve into much of his past work before the shoot. “I was probably right not to do that, because if I had seen the first ‘Borat,’ I would have been much more scared to improvise with him because he’s a genius,” she said. “I’d have to prove to myself that I am not going to ruin his movie.”

During the “Borat” shoot, she said, she was scared but also surprisingly comfortable with the process. “You’re nervous because it’s so unpredictable, but it’s also extremely addictive,” she said. “And when you have a partner like Sacha, it’s the best thing ever.” She did occasionally feel bad for the real people that she and Baron Cohen were fooling, particularly Jeanise Jones, a woman hired to babysit Tutar — and she was concerned before the scene with Giuliani that she had to persuade him that she was a real journalist interviewing him. “I was worried that I would be exposed as an actress, because he’s a lawyer, and he’s the president’s lawyer,” she said. “So I have to be most convincing.”

And now that “Borat” has brought her to Hollywood, she’s liking the view from inside her childhood dream. “I love L.A.,” she said. “I love the weather. It was my first Christmas surrounded by palm trees. I’ve always watched it in the movies and thought, ‘Are these people on a set, or is that possible?’ Now my dreams are happening, and it tells me that things are possible.”