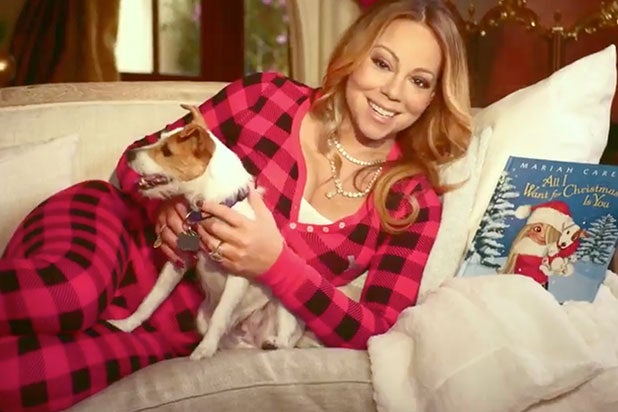 Mariah Carey’s iconic Christmas song “All I Want For Christmas Is You” is being turned into an animated movie.

The singer took to Twitter on Tuesday to reveal the news about the upcoming Universal film, which will be released sometime this holiday season.

In the clip, Carey is lying on a couch in a pair of red pajamas with a dog: “I don’t want a lot for Christmas. There’s just one thing I need,” she says, before blowing a kiss to the camera at the end of the video.

The 1994 hit song was previously turned into a children’s book in 2015. Carey authored, with illustrations by Colleen Madden. The book follows a young girl who wants a puppy for Christmas. It’s unclear if the film will tell a similar story.

Carey co-wrote “All I Want For Christmas Is You” with Walter Afanasieff (“My Heart Will Go On” producer) for her 1994 holiday album, “Merry Christmas.” It has since become a holiday staple and has been covered by various artists like Justin Bieber and Ariana Grande.

The movie will be released on Blu-Ray, DVD, Digital HD and On Demand from Universal 1440 Entertainment, an entity of Universal Studios Home Entertainment.

“Like the song itself, ‘Mariah Carey’s All I Want for Christmas is You’ is destined to become an enduring family holiday classic,” said Glenn Ross, general manager and executive vice president, Universal 1440 Entertainment. “It is packed with family fun, holiday spirit, poignant moments – and of course, Mariah Carey!”

Watch the clip announcement below.

My song is becoming a movie! You’re the first to hear about this exciting news! Follow @AllIWantMovie for more updates. #AllIWantMovie pic.twitter.com/vb1j75eGZk