On Tuesday, the twitter account belonging to R&B legend Mariah Carey was briefly hijacked by hackers who subsequently used it to post racist, pornographic and sexist messages — and attempt to reignite Carey’s old disagreement with rapper Eminem.

The hackers, who called themselves “Chuckling Squad,” revealed themselves at 3:23 p.m. on Tuesday by tweeting “Eminem can still hold this p—-” from Carey’s account. The comment was an apparent reference to a longstanding argument between the singer and the rapper after he claimed they dated in a 2002 song. Carey has long denied she and Eminem dated, and has pushed back against the claim in several songs of her own.

Representatives for Carey didn’t immediately respond to a request for comment from TheWrap. However, within approximately half an hour, the “Vision of Love” singer or her representatives had regained control of her account, and the offending tweets — along with everything else Carey has ever tweeted — were deleted. Carey has not tweeted anything new as of this writing.

See some screenshots from the hack — with profanities as well as the hackers’ self identifications edited out so as not to publicize them — below: 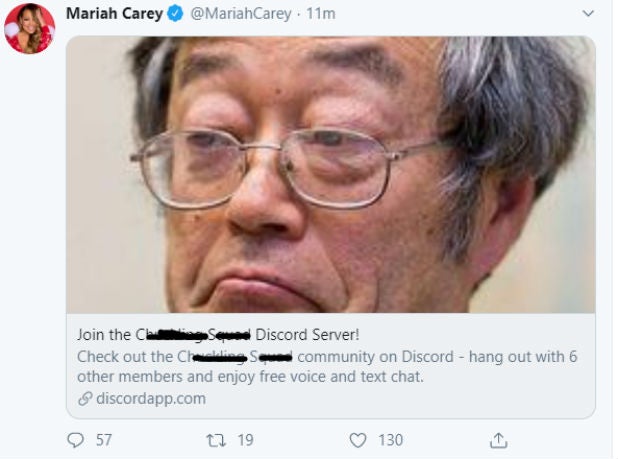