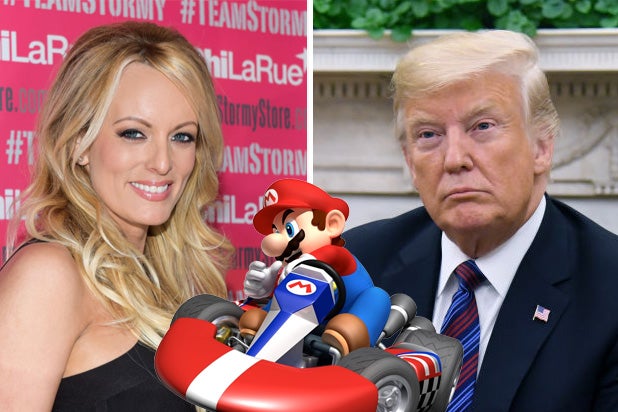 Mario Kart was trending on social media Tuesday — but not because of a new version of the classic video game.

“He knows he has an unusual penis,” Daniels writes, according to the Guardian. “I lay there, annoyed that I was getting f—ed by a guy with Yeti pubes and a d— like the mushroom character in Mario Kart …”

And in what could be a rebuke to an infamous line from Trump’s second wife, Marla Maples, Daniels adds, “It may have been the least impressive sex I’d ever had, but clearly, he didn’t share that opinion.”

Trump has consistently denied having an affair with Daniels, though he has acknowledged reimbursing his personal attorney Michael Cohen for a $130,000 payment to Daniels on the eve of the 2016 election to keep quiet about her version of events.

Daniels (né Stephanie Clifford) has said that she continued to interact with Trump for more than a year after their first encounter in 2006 — one year after he married his third wife, Melania Trump — in hopes that he would make good on a promise to try to get her cast as a contestant on his NBC reality show, “Celebrity Apprentice.”

In another passage that the Guardian cites from her new book, Daniels says that Trump suggested that he might be able to help her go further in the competition by underhanded means: “He was going to have me cheat, and it was 100 percent his idea.”

“We’ll figure out a way to get you the challenges beforehand,” she quotes him as saying, according to the Guardian. “And we can devise your technique.”

The White House has not yet responded to requests for comment on Daniels’ latest accusations.

Needless to say, though, a lot of people have been grossed out by her new account.

Me, logging on first thing in the morning: oh why is Mario Kart trending, maybe today won’t be that ba— pic.twitter.com/kq2twgyiWz

Toad was also trending on Tuesday, as most users believe that is the Mario Kart character Daniels was referring to.

I am Toad’s publicist. As you can imagine, this is a difficult moment for him and he will not be giving comment to the press until he’s had time to collect his thoughts pic.twitter.com/YyJB81DzDM

Me: oh, Toad is trending! I wonder if they announced a new game this morning
…15 seconds later pic.twitter.com/4bV5zn5AbZ