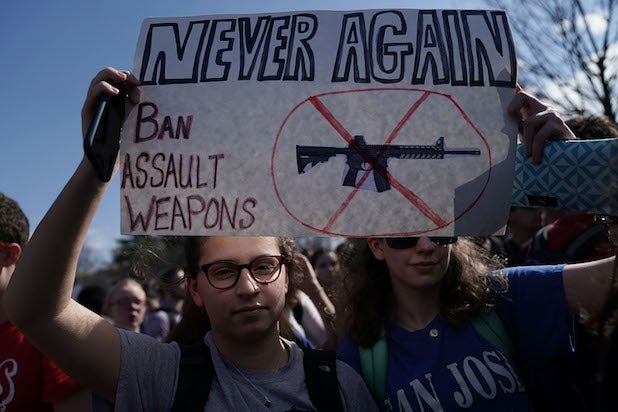 Survivors of the shooting last week at Marjory Stoneman Douglas High School in Parkland, Florida, are speaking at the state’s capitol Wednesday to demand action from state lawmakers on gun control.

Students from across the state walked out of school in solidarity with the Marjory Stoneman Douglas students to protest, chanting “Shame on you” and “Never again.”

Junior Lorenzo Prado is one of several Marjory Stoneman Douglas students to speak at the rally, and told the harrowing story of being mistaken for the shooter.

“I was unjustly cuffed and held at gunpoint for the degrading and depreciating action of the disturbed individual Nikolas Cruz,” Prado said. “I knew any move I made would be the end of my life.”

Florida school shooting survivor Lorenzo Prado tells an incredible story about being confused for the mass murderer amid the chaos last week pic.twitter.com/7e38qCqHDs

Also Read: Florida Shooting Survivor David Hogg Strikes Back at Right-Wing Trolls: 'I Am Not a Crisis Actor'

“When I went out those doors, I had six SWAT members pointing their guns at me. I was tossed to the ground. I was unjustly cuffed and held at gunpoint for the degrading and depreciating action of the disturbed individual Nikolas Cruz,” Prado said.

“I was then put in a corner with a policewoman guarding me,” he continued. “I knew any move I made would be the end of my life. Throughout the entire event, I only felt two things: I felt fear, as I did not know my future. I did not know if i was going to be let go. I did not know where the terrorist was. … A the second thing was guilt.”

In a lengthier version of his speech posted by Mediaite, Prado placed blame on the inaction of lawmakers, saying, “The law has failed us.”

The rally in Tallahassee comes the day after Florida lawmakers rejected a bill that would ban many semiautomatic rifles and large-capacity ammunition magazines.

“We’ve had enough of thoughts and prayers,” she said. “To every lawmaker out there: No longer can you take money from the NRA.”

Florida school shooting survivor Delaney Tarr: “We’ve had enough of thoughts and prayers… To every lawmaker out there: No longer can you take money from the NRA… We are coming after every single one of you and demanding that you take action” https://t.co/j5nKyzE0sK pic.twitter.com/zuYcaKUr2s

“I was speechless. I had anger, dismay, shock,” said junior Spencer Blum of the ban’s failure to pass. “They had even introduced us, they knew we were up there. The beautiful choir sang a prayer for us. They knew we just went through a mass shooting that killed 17 people.”

Students also gathered in Washington, D.C. to protest for stricter gun control in solidarity with the Stoneman Douglas students.

Donald Trump is holding a listening session at 4:15 ET and CNN is hosting a town hall with students, parents, lawmakers and the NRA at 9 p.m. ET.