After five years away, professional dancer Mark Ballas made his return to “Dancing With the Stars” ballroom on Monday night as the show moved to Disney+, hitting the top spot on the leaderboard with his celebrity partner, TikTok star Charli D’Amelio. And backstage, after the show, the pro reacted to not only getting the night’s top scores but also praise from his longtime friend Derek Hough, who has since become a judge on the show.

“Derek and I have been friends since we were 10. We’ve lived together, we went to school together every day, you know? Dude used to steal my clothes. We’re friends. … Brothers even. So it was really cool to be out here and it was funny seeing him on the judge’s table because I haven’t been here since he’s done [that],” Ballas said when TheWrap asked him about his return.

“But how did it feel? It felt great,” he continued of being back in the ballroom. “It felt the same but new, fresh, nostalgic, you know? And then being out there with [Charli] – it was a good time. I felt really good tonight. And it’s great to be in the top spot. We weren’t anticipating that. The only thing we wanted to do was work super hard, maximize our rehearsal time and just do the best that we possibly could. And we had a good night tonight.” 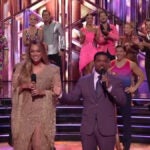 Ballas and D’Amelio were the last couple to perform on Monday night’s two-hour premiere event, tackling a cha-cha to the tune of 32 out of 40 points and big praise from the judges.

“Season 31 just got real hot, real quick,” judge Carrie Ann Inaba commented at the end of their routine. “The nuances – you are such a nuanced performer … it was kind of amazing. Now I get it. TikTok, welcome to Disney+.”

Judge Bruno Tonioli added, “This performance is really the cherry on the cake.”

After the show, D’Amelio, who was 4-years-old when Ballas won his first mirrorball in 2008, said she couldn’t have been happier with how the night turned out.

“It feels so amazing. I have the best partner that I could have asked for, and I’m really proud of what we did today and I’m excited for next week, you know a new style every week” she said. “We’re starting from scratch again, you know, so it’s gonna be fun, but I’m excited to see what everyone else does.”

Next week, the pair will return to compete for Elvis week.