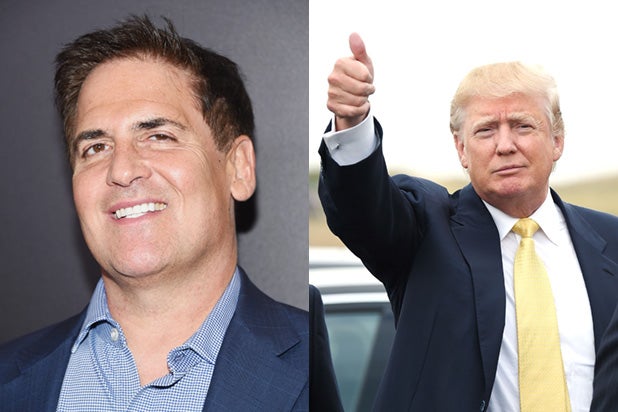 Mark Cuban thinks Donald Trump would bomb on “Shark Tank” so fast “it would make your head spin.”

“Name one good deal he’s done,” he asked Extra’s Renee Bargh, who said she couldn’t think of one. “Neither can he. When he talks about his great renegotiations, they’re renegotiations. Tell me if you think this is a good deal: I lose four casinos, they go out of business, but I’m really good at renegotiating the debt of my companies that have already gone out of business. He would get kicked out of ‘Shark Tank’ so fast it would make your head spin.”

However, Cuban had to give Trump some “credit,” albeit backhandedly so, for his campaign.

“It’s rare that you see someone get stupider before your eyes, but he’s really working at it,” he added. “So you gotta give him credit. It’s not an easy thing to do, but he’s accomplished it.”

On Tuesday, Cuban also ribbed Trump on Twitter about his finances after the New York Times reported that Trump has the worst financial and organizational disadvantage of any major party nominee in history.

“If @realDonaldTrump were fractionally as rich as he says he is, he would write a$200mm check to propel his campaign. He doesn’t have the cash,” tweeted Cuban.

A year ago, however, Cuban said that Trump’s presidential bid was changing thanks to his tell-it-like-it-is approach.

“Up until Trump announced his candidacy the conventional wisdom was that you had to be a professional politician in order to run,” Cuban said. “You had to have a background that was politically scrubbed. In other words, smart people who didn’t live perfect lives could never run. Smart people who didn’t want their families put under the media spotlight wouldn’t run. The Donald is changing all of that. He has changed  and for that he deserves a lot of credit.”

In his interview with Extra, though, Cuban suggested Trump hasn’t grown as a candidate.

“At some point, you gotta start learning and understand the issues,” said Cuban. “Donald has been in this a year and you don’t look at him saying, ‘Wow, he’s gotten so much smarter about this topic.’ Instead, we say, ‘What the hell are you talking about?’ That’s not good for America.”

Watch his interview below.