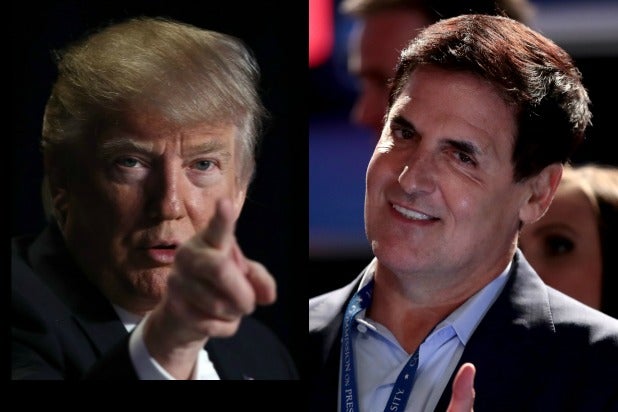 Dallas Mavericks owner Mark Cuban advised President Donald Trump to prepare for “blowback” for his call to have NFL players who refuse to stand for the national anthem “fired or suspended.”

“If the president’s going to say something condemning a person, an industry, a sport, then he’s got to be able to take the blowback that’s going to come back,” Cuban told NBC’s “Meet the Press” on Sunday.

“So LeBron [James] and Steph [Curry] and any athlete, any owner, it’s an open door now, and so they have every right for the same reasons to be able to say whatever’s on their mind,” he added. “Now we’ll be able to see if he can take it.”

Trump kicked up his ire against athletes who kneel during “The Star Spangled Banner” to protest racial injustice during a Sunday morning Twitter rant, calling for players who refuse to stand for the national anthem be “fired or suspended” and suggested a fan boycott of NFL games.

Cuban, who once volunteered to be Hillary Clinton’s vice presidential running mate, spoke of Trump to Extra in June 2016, saying, “It’s rare that you see someone get stupider before your eyes, but he’s really working at it. So you gotta give him credit. It’s not an easy thing to do, but he’s accomplished it.”

Over the past nearly two years, Trump and the billionaire investor of ABC’s “Shark Tank” have fought in a war of words on Twitter with back and forth jabs.

Check out the video interview below.