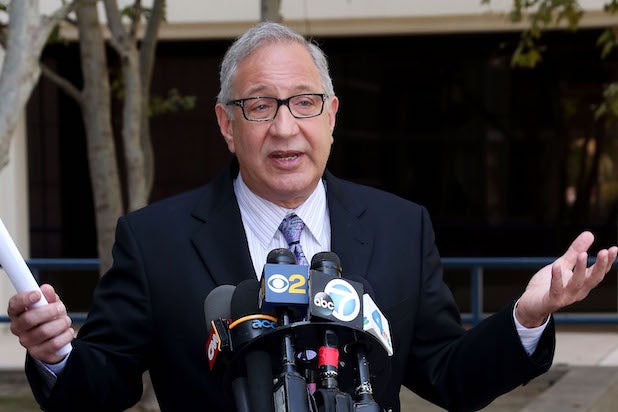 Attorney Mark Geragos is lashing out at CNN for firing him on Monday after the Wall Street Journal and other news outlets identified him as the unnamed co-conspirator in the case that led to the arrest of Michael Avenatti on criminal charges of extortion and conspiracy.

“They ought to change their name to the ‘Cut and Run Network,'” Geragos said on the “Adam Carolla Show” Wednesday. “I’ve been texted by all of their anchors who are as outraged as I am that after 20 years, a press conference is enough to have them immediately want to disassociate themselves.”

Geragos, a camera-friendly attorney to the stars, found himself on the other side of the law after his name surfaced in connection with a federal criminal complaint against Avenatti, the lawyer who rose to fame after briefly representing adult-film star Stormy Daniels in her suit against President Donald Trump.

Also Read: Mark Geragos Dropped by CNN After Being Identified by WSJ as Co-Conspirator in Michael Avenatti Case

Avenatti was arrested in New York on Monday after federal prosecutors accused him of trying to extort $20 million from athletic-wear giant Nike. Avenatti has denied any wrongdoing.

Several medial outlets later identified Geragos as an unnamed co-conspirator in the case.

CNN quickly fired him as a legal pundit, scrubbing his name from its site.

A spokesperson for the CNN told TheWrap Monday that Geragos “is no longer a CNN contributor” but did not say why.

“God forbid that I start telling some of the stories for how I’ve covered for that lame-ass organization,” Gergagos told Carolla on Wednesday, dubbing CNN “the Know-Nothing Network.”

Geragos, who co-hosts a podcast called “Reasonable Doubt” along with Carolla, said he “can’t get into” the details of the legal case, but noted that he felt “confident” about it.

A prominent attorney to troubled Hollywood stars, Geragos currently represents former “Empire” star Jussie Smollett, who was accused of paying two men to attack him in what police say was a scheme to raise his profile and salary on the Fox series.

On Tuesday, prosecutors abruptly dropped all charges against Smollett.

Geragos said that CNN anchors and reporters blew up his phone all day yesterday to try to get him on to talk Jussie Smollett, calling it a “delicious irony.”