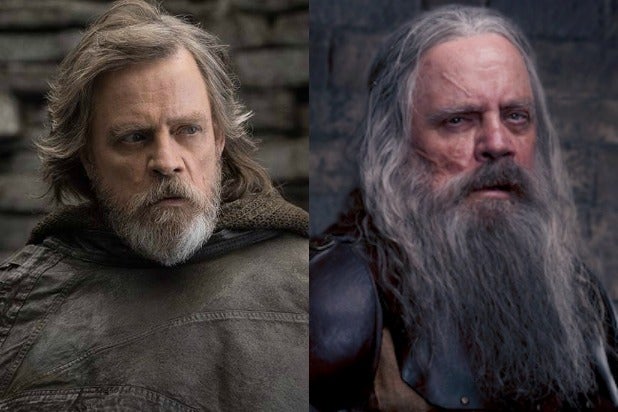 When Mark Hamill joined Season 2 of History’s “Knightfall,” he swapped his long-held lightsaber for a Medieval sword. But he didn’t switch completely from one world to another, seeing as the themes in the drama series are similar to those explored in “Star Wars.”

And yes, Hamill is aware that the Knights Templar — the group he’s entering for the Tom Cullen-led drama — were part of what inspired George Lucas’ Jedi — a group he’s all too familiar with due to his decades of playing Luke Skywalker in the franchise.

Hamill was asked during the Television Critics Association press tour Sunday if the “connection” between the Knights Templar and the Jedi created “any hesitancy for you in taking on this role or is that something you thought of at all.”

“Not until after I accepted. I didn’t really think it through,” Hamill joked.

“The truth of the matter is that I’m sure George drew from- George drew from so many different inspirations of his own, both in the movies and in literature,” Hamill continued, seated alongside Cullen and new showrunner Aaron Helbing. “He was probably thinking more of King Arthur and the Knights of the Round Table, because it was more idealized and glamorous, certainly, than the Templar knights. But there’s no question that his inspiration was rooted partially in this mythology.”

Hamill last reprised the role of Luke Skywalker for 2017’s “Star Wars: The Last Jedi,” a film in which Luke appeared to meet his end — and Hamill has been super cagey about his status with “Star Wars: Episode IX” ever since.

Also Read: Lifetime Greenlights a Sequel to 'Harry and Meghan,' Royal Couple to Be Recast

On Season 2 of “Knightfall,” Hamill plays Knight Templar vet Talus, who he describes as “basically the equivalent of a medieval drill sergeant.” You can see him in action for the first time in the trailer here.