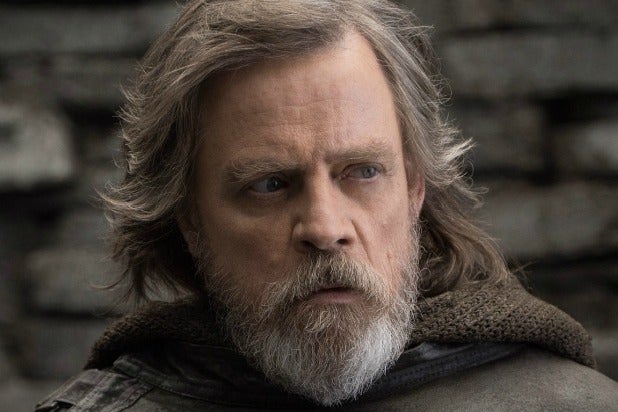 Did Luke Skywalker really die at the end of “The Last Jedi”? If you’re firmly on the “yes” side of this debate, then you are standing opposite Mark Hamill, who hopes his beloved character is alive and well… and naked.

“I refuse to believe that he’s gone,” Hamill told the BBC during the Oscar Wilde Awards, which were held at “Star Wars” director J.J. Abrams’ Bad Robot headquarters in Santa Monica on Thursday. “My theory is he just teleported to somewhere else and left his robe behind. He teleported to a nudist colony, that’s what I’m hoping.”

As fans will remember, at the end of the most recent installment in the saga, Luke astrally projected from his home on the island of Ahch-To to Crait to say goodbye to his sister Leia (Carrie Fisher) and allow Rey (Daisy Ridley) and the Resistance to escape while he had a serious showdown with Kylo Ren (Adam Driver). Following his successful attempt to outwit his nephew, Luke vanishes, leaving nothing but a pile of clothes behind.

Also Read: James Gunn and Mark Hamill Are Down for a 'Guardians of the Galaxy Vol. 3' Team-up

Whether or not you agree with Hamill’s theory (he did disappear in the nude, after all), things are never as they seem in the franchise, and there is always a chance for Luke to reappear one way or another.