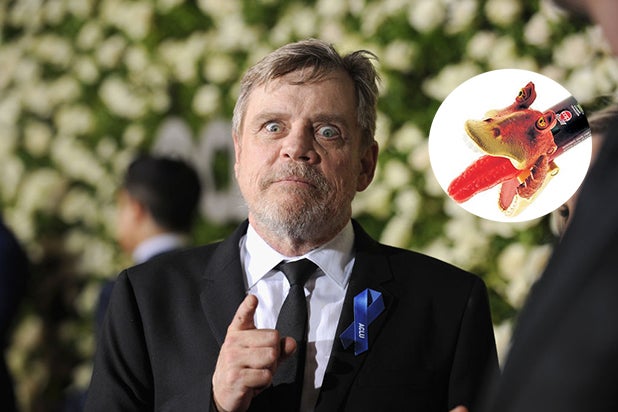 Mark Hamill is something of a merchandise connoisseur thanks to his decades starring in the nerdiest, most merchandise-heavy franchise in history and a lifetime of being into the hobby himself (see his show “Pop Culture Quest”).

So when he deems something the goofiest piece of “Star Wars” merchandise he’s ever seen, we can trust that he speaks the truth.

It all began on Wednesday, which was National Selfie Day, when Hamill tweeted a pic of himself wearing a shirt with his face on it. The Twitter account for Star Wars Reporter then sent him a tweet reminding him that there was a Luke mask once available on cereal boxes.

That’s when film critic Scott Weinberg asked the actor what was the goofiest Luke merchandise or toy that he had ever seen. Hamill didn’t take long to answer.

“The Luke that could be removed from a disemboweled Tauntaun certainly comes to mind,” he responded.

Too many to choose just 1- but the Luke that could be removed from a disemboweled Tauntaun certainly comes to mind. #GoofyGutsyGrossLuke #SW https://t.co/AagCh68pkS

The toy pays weird tribute to the scene in “Empire Strikes Back” when Han Solo cuts open the belly of a dead Tauntaun with a lightsaber and stuffs Luke inside, hoping to save his life. It’s only a little creepier than the Tauntaun sleeping bag, where you yourself can climb into the creature.

Tweets began flooding in from people offering up their own awful “Star Wars” merchandise. What started off as a quest to find the worst Luke toy turned into something weirder —  everything from “Star Wars” adult diapers to a space slug oven mitt.

How about this space slug oven mitt? pic.twitter.com/jL8UeaHi2F

However, Hamill declared a winner after he saw a tweet from HamillMania featuring — wait for it — a Jar Jar Binks lollipop and candy dispenser that allowed you to lick the tongue. It might be the worst thing we’ve ever seen.

This is the goofiest SW item ever! Don't you think, @HamillHimself? pic.twitter.com/LVwvGzMSQD