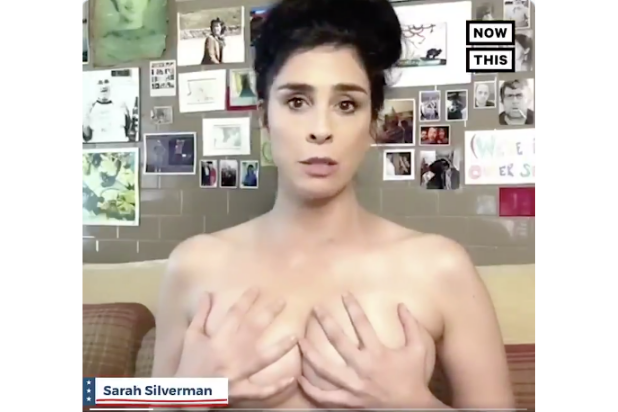 A surprising number of celebrities all appeared naked in the same video on Wednesday with the noble mission of spreading important information about how to fill out and send mail-in-ballots for the 2020 presidential election.

In the “Now This” video, which has just shy of 2 million views, Mark Ruffalo, Chris Rock, Sarah Silverman, her dad “Schleppy,” Tiffany Haddish, Ryan Bathe, Naomi Campbell, Josh Gad, Amy Schumer, Chelsea Handler, and more celebrities all got “butt ass naked,” as Haddish put it — well, at least from what we could see, which was mostly from the chest up.

Oh yeah, Sacha Baron Cohen was there as Borat, too — but he, thankfully, was fully clothed.

The stunt was a clever play on words with the term “naked ballot,” which in certain states refers to a ballot that is not properly “stuffed” into two different envelopes before it is mailed.

Other important tips the celebs mentioned were to read all of the instructions thoroughly before filling the ballot out — like using a black pen if it says so, not blue or pink or what have you — and to mail the ballot in as soon as possible.

“Don’t sit on them. Get those things out!” said a bare-chested Ruffalo, who we presume was naked except for the tasteful silver necklace gently nestled into his chest hair.

Also Read: Mark Ruffalo Did '500 Pushups a Day' While Playing Dominick in 'I Know This Much Is True,' Director Says

The only celebrity who really exposed anything other than their clavicle, in fact, was Silverman, who covered her breasts with her hands (“to be honest, I wish I could cover my hands with my boobs, but here we are,” she said).

But in any case — and in any state of dress — these celebs suggest you make like Haddish, and get your ballot “to the motherf—in’ post office.”

Celebs including @SarahKSilverman, @TiffanyHaddish, and @chrisrock are stripping down to bring attention to naked ballots and encourage voters to follow vote-by-mail instructions (via @representus) pic.twitter.com/VMr3LVY2C7