Would you trust Mark Zuckerberg to be your matchmaker?

Facebook is betting millions of people will take that chance, with the social network’s dating service — dubbed Facebook Dating — launching in the U.S. on Thursday.

Here’s how it works: Facebook users, after clicking on the menu button on their mobile app, will see the Dating tab and can opt-in to creating a profile. The profile will be separate from their standard Facebook account. Users will be able to integrate recent pictures from their Instagram accounts as well, if they want.

Facebook will then send dating recommendations based on interests users have shown on Facebook. While Facebook Dating looks like a hybrid of Tinder and Hinge, there is no swiping. Instead, the service will let users send a like and a message to any profile that catches their eye. And if you’ve been waiting years to see if your high school crush ever felt the same way about you, Facebook lets users pick up to nine Secret Crush users from their Facebook and Instagram friends; if your crush also picks you, Facebook will send a notification to both users letting them know they’ve matched.

Eventually, Facebook plans to integrate Stories into the service. Here’s a concept design Facebook shared on its blog on Thursday: 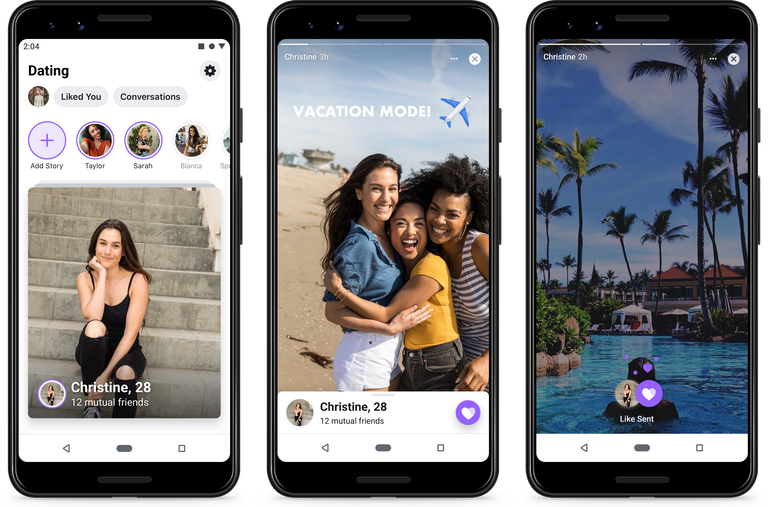 If you’re worried about creeps, Facebook said that it’s added several layers of protection, including the ability to block and report anyone. Facebook will not allow Dating users to send pictures or video, and when users go on a date, they can click a shield icon that will alert a friend where they’re headed; users will also be able to temporarily share their location if they’d like.

“Finding a romantic partner is deeply personal, which is why we built Dating to be safe, inclusive and opt-in,” Nathan Sharp, product manager of Facebook Dating, said in a blog post. “Safety, security and privacy are at the forefront of this product.”

The dating service is free and ad-free. After launching in several countries in South America and Asia, the U.S. became the 20th country to get the service; Sharp said Facebook plans to launch Dating in Europe early next year.

The stock price of Match Group, the parent company of Tinder and several other dating sites, dropped nearly 6% in early morning trading on Thursday.