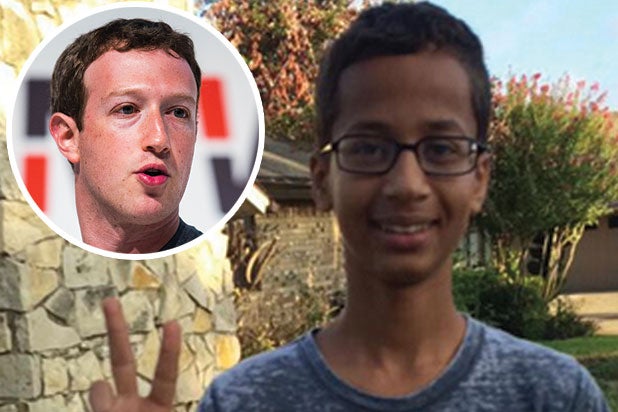 Mark Zuckerberg invited 14-year-old Ahmed Mohamed, a student who was arrested for bringing a self-made alarm clock to school on Monday, to Facebook’s headquarters while praising his skill and ambition.

“You’ve probably seen the story about Ahmed, the 14-year-old student in Texas who built a clock and was arrested when he took it to school,” Zuckerberg wrote on his personal Facebook account. “Having the skill and ambition to build something cool should lead to applause, not arrest. The future belongs to people like Ahmed. Ahmed, if you ever want to come by Facebook, I’d love to meet you. Keep building.”

Mohamed was proud of the clock he made with a circuit board with wires leading to a digital display, and wanted to show it to his teachers at MacArthur High School in Irving, Texas.

However, one teacher alerted authorities when she mistook it for a bomb, and Mohamed was put in handcuffs shortly after. But realizing there was no imminent threat, the boy was released.

Since then, the #IStandWithAhmed hashtag started trending on Twitter. Even President Obama has invited Mohamed to bring his alarm clock to the White House on Twitter.

Cool clock, Ahmed. Want to bring it to the White House? We should inspire more kids like you to like science. It’s what makes America great.

The arrest has prompted questions about bias against Muslims. Ibrahim Hooper, a spokesperson for the Council on American-Islamic Relations, said that “It would not have occurred if he did not have a Muslim name and have a heritage from the Muslim world.” Mohamed has also thanked his supporters on Twitter.

Thank you fellow supporters. We can ban together to stop this racial inequality and prevent this from happening again pic.twitter.com/fBlmckoafU — Ahmed Mohamed (@IStandWithAhmed) September 16, 2015 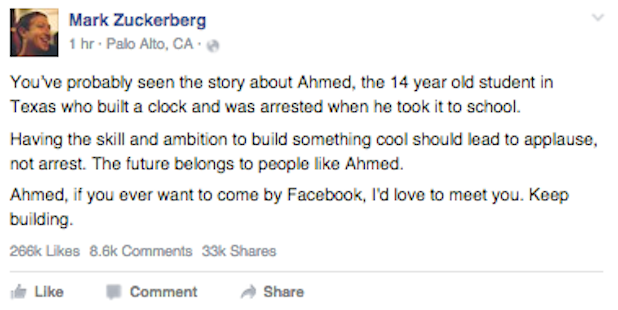