Marlon Wayans is getting the comedy treatment at Starz.

The network is developing “Book of Marlon,” inspired by the actor and comedian’s life, it was announced on Tuesday. Wayans will play a fictionalized version of himself in the series.

Wayans will star, co-write and executive produce the series. Diallo Riddle and Bashir Salahuddin are the showrunners as part of their overall deal with Warner Bros. Television. They’ll also executive produce as will Rick Alvarez and Michael Rotenberg.

“We believe Marlon is a once-in-a-generation talent and we’re thrilled to finally be working with him in this capacity on a show,” Riddle and Salahuddin said in a statement. “We can’t wait for people to get a glimpse of what his real life is like and we can’t thank Starz  enough for allowing us to do so in an unflinchingly honest way.” 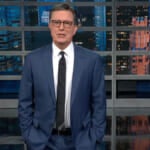 Also Read:
Colbert on That Bernie Sanders Capitol Steps Photo: ‘He Looks Like the Depressed Legislation From ‘Schoolhouse Rock’ (Video)

“We’re excited to be in business with such enthusiastic partners. Starz is a big brand, and we are happy to bring some smiles to the table,” Wayans said in a statement of his own. “It’s great to know that we can push the envelope and get into some good, fun trouble with this project on this platform. Diallo and Bashir are good friends and great collaborators. ‘Book of Marlon’ will be smart, fun and twisted with a dash of heart and a whole lot of unapologetic humor.”

“We are beyond thrilled to develop this sophisticated and hilarious series with Marlon, Diallo, Bashir and Rick, who each bring their own level of artistry and authenticity to everything they touch,” Kathryn Busby, president, Original Programming at Starz, said in a statement. “I’ve long admired Diallo’s and Bashir’s work, and I’m excited to be working on a project as special as this with the incomparable Marlon Wayans at the center.”