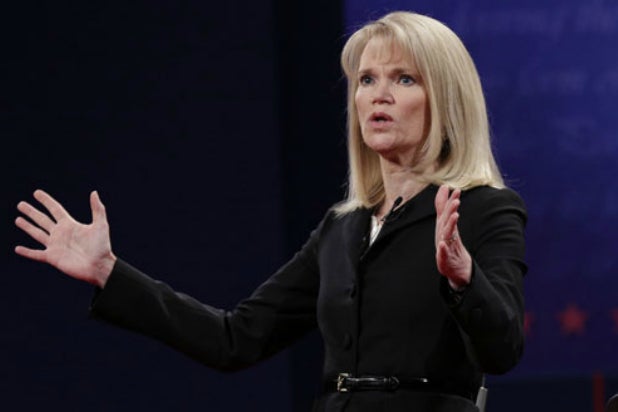 Much like two weeks ago, there was a lot of frustration on Twitter expressed towards Hillary Clinton and Donald Trump during Sunday’s town hall debate. But this time, there was at least one person who walked off the stage looking like a star.

That person was ABC News global affairs correspondent Martha Raddatz, who was in charge of moderating the debate alongside CNN’s Anderson Cooper. While past moderators like Lester Holt have come under fire on social media for how they handled the candidates, Raddatz was praised for keeping the debate under control and preventing the candidates from straying off-topic when answering questions. And for Clinton supporters, her counters to Trump’s claims were a breath of fresh air.

Martha Raddatz trying to tutor Trump on foreign policy in real time. In the middle of a presidential debate. This is unprecedented.

The light in this campaign: I’m finding new journalists to admire. @MarthaRaddatz is easily one of them tonight.

Martha Raddatz about to get out of her chair, shake Trump by the shoulders and say “answer the goddamn question.”

MARTHA RADDATZ: Ms Clinton, please respond
CLINTON: The Rapture begins in 6 hours. We all deserve death
TRUMP [breathes out a swarm of bees]

Some commentators and tweeters noted that Trump and Raddatz seemed to lock horns at several points during the debate, particularly when she asked Trump questions concerning foreign policy.

Martha Raddatz, who has covered many a war, is trying to explain defense strategy to Trump in a question…

Trump is trying to engage Martha Raddatz in discussions of the Middle East. The woman has flown in 90 times. During both war & peace.

Overall, most people seemed to be pleased with Raddatz’s performance, though some conservative corners felt she was too soft towards Clinton.

Does anyone else want to vote for @MarthaRaddatz as president?! #IDo #debate

Winner of this #debate: @MarthaRaddatz, by a long shot.

Why is Raddatz debating trump?
Isnt that hillarys job?

With the election less than a week away, here are the stars who will be voting for President Donald Trump’s second term in 2020