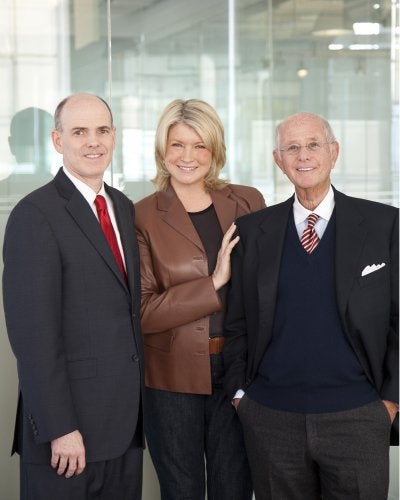 This is big: Martha Stewart is taking her daytime brand to Hallmark Channel.

Her NBC Universal-distributed syndicated show will end this summer and shift to Hallmark in the fall as part of a new daytime block of lifestyle shows. Stewart and her Martha Stewart Living Omnimedia will also develop original specials and interview shows for Hallmark’s primetime lineup as part of a broader "strategic partnership."

"I’ve been a viewer of Hallmark as long as I can remember," Stewart said during a conference call. Stewart — who called it the "perfect fit" — said "it is so important to be on TV when our viewers can watch us."

Stewart indicated that the show will now air at 10 a.m. with repeats at 4 p.m. and 5 p.m., appealing to both the "working mom" and "stay-at-home mom."

"Now they’ll know there is a specific time and place she can see the program," Stewart said.

"That’s always been the problem with syndication," MSLO executive chairman Charles Koppelman added. "For us it was the same way."

While Martha-mania has cooled a bit in recent years, her brand is a good fit with Hallmark’s wholesome, boomer-centric programming strategy. The network has already had success with its original movie focus in primetime, staying in a game most other networks have exited.

Here’s the official release. Not mentioned: Mark Burnett, who’s been executive producing Stewart’s syndicated show. Still checking to see if he and the rest of the creative team will continue with Stewart to cable. (UPDATE: Burnett’s off the show.):

Announcement of the partnership was made today by Bill Abbott, President and CEO, Hallmark Channels, and Charles A. Koppelman, Executive Chairman of MSLO.

As part of the agreement, MSLO will also develop a range of new and original series and prime time specials that will complement Hallmark Channel’s current schedule of popular original movies, movies from the acclaimed “Hallmark Hall of Fame” library collection, specials and classic television series. In 2010 the network will produce 24 original movies.

Beginning in the fall, Mondays through Fridays, “The Martha Stewart Show” will be presented 10-11 a.m. (ET/PT), kicking off a two-and-half-hour block of original Martha Stewart programming. The flagship how-to series will continue to be filmed in New York City with a live studio audience, informing and inspiring viewers on subjects from cooking and entertaining to crafting and gardening. Encore performances of the daily show will also be presented on the network.

Following “The Martha Stewart Show” from 11 a.m. – 12:30 p.m. (ET/PT) each weekday, Hallmark Channel will present exclusive original programming currently in development at MSLO that will feature a portfolio of creative content for which the Martha Stewart brand is known and which will showcase experts and personalities from within MSLO. Additionally, MSLO will develop numerous holiday and interview specials for prime time on the network.

“This is a match made in TV heaven. We couldn’t be more excited about welcoming Martha Stewart to the Hallmark Channel family. She is the undisputed leader in cooking, home décor, design and gardening, and ‘The Martha Stewart Show’ is the kind of high-quality, programming that celebrates life, exemplifying Hallmark Channel and the Hallmark brand,” said Mr. Abbott. “We believe the creative programming, branding and advertising opportunities this partnership presents are limitless. As these properties join our already strong lineup which includes a full slate of original movies, our viewers, distributors and advertisers will continue to see in Hallmark Channel a destination like no other.”

Mr. Koppelman stated: “We’re very excited about this partnership, which brings together two powerful and trusted brands in the lifestyle arena. The new relationship builds our broadcast strategy, greatly extends our media platform and reach, and we anticipate will have a positive impact on our business. This also will benefit our merchandising and advertising partners, while offering viewers multiple opportunities to watch and learn from Martha and MSLO experts on a single channel at consistent time periods around the country.” Mr. Koppelman added: “As we make this move to Hallmark Channel, we also want to thank NBC Universal Domestic Television and their affiliates for their support over the past five years. We’re proud of all that we have accomplished together.”

MSLO Founder Martha Stewart added: “It has long been a dream of mine to bring our unique evergreen content to television in an expansive way. I’m delighted that we have found the perfect home for the kind of programming that consumers look to us for, a home that is devoted to excellence, family life and celebrations – what we call Living. Our core values and content areas–entertaining, weddings, crafting, cooking, gardening, holidays, pets and humor–are a perfect fit with Hallmark Channel. I’m thrilled with the opportunity to further develop MSLO’s deep pool of talent and provide audiences with exciting new programming that educates, informs, entertains and inspires.”

“The Martha Stewart Show” is in its fifth season and is currently distributed by NBC Universal Domestic Television Distribution.