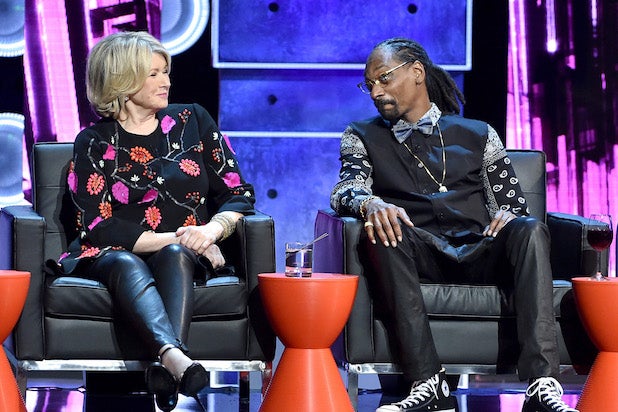 Described as “a half-baked evening of cocktails, cooking, conversation and fun where nothing is off limits,” the series will feature the two pop culture icons hosting celebrity guests over for dinner for an unusual take on the traditional food competition show.

“How did me and Martha get together to do this show? A glass of wine, herbs, tea, atmosphere,” the rapper says in a promotional video for the show.

The pair were last seen together on Comedy Central’s Justin Bieber roast and ABC’s “The $100,000 Pyramid.” Snoop has also appeared on Stewart’s show where the two made mashed potatoes and brownies together.

“My homegirl, Martha and I have a special bond that goes back,” the rapper said in a statement. “We’re gonna be cooking, drinking and having a good time with our exclusive friends. Can’t wait for you to see how we roll together!”

“Martha & Snoop’s Dinner Party” premieres this fall on VH1. The series is created and executive produced by Stewart and Kim Miller Olko for Sequential Brands Group, Snoop Dogg and Ted Chung for Merry Jane and SallyAnn Salsano for 495 Productions.

“Our new show is rizzle dizzle fo shizzle,” Stewart says in the video.