The Avengers assembled on Christmas morning as Francesca Scorsese, daughter of Martin Scorsese, in an epic troll of her filmmaker dad wrapped his Christmas presents in Marvel gift wrapping paper.

“Look what I am wrapping my Dad’s Xmas gifts in,” she said in an Instagram story post which featured the images of Captain America, The Hulk and Thor. 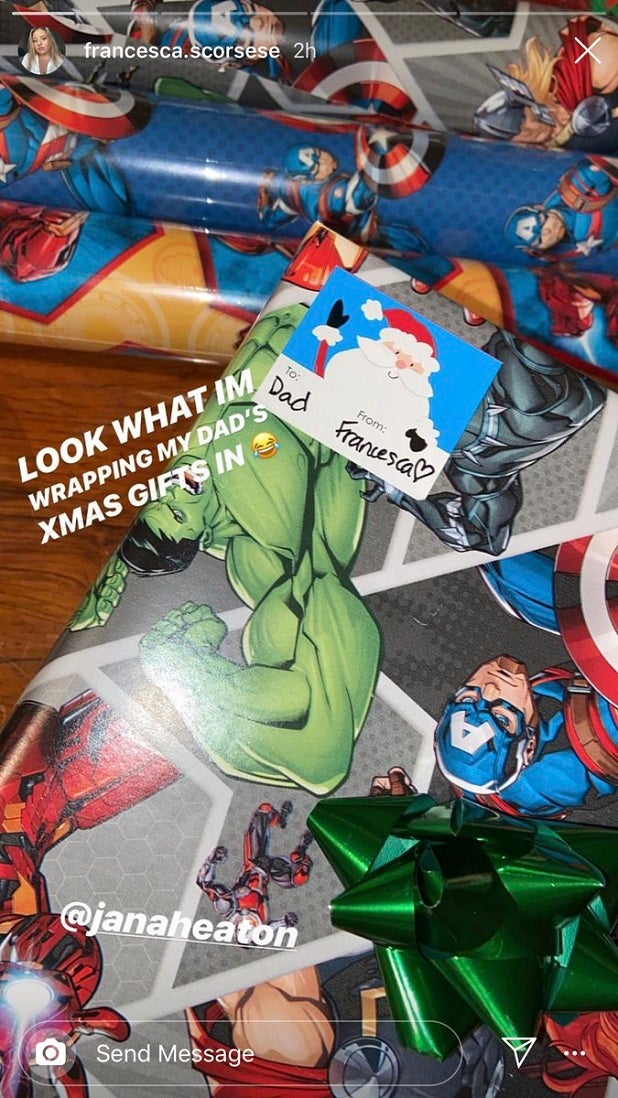 Since the filmmaker was asked by Empire Magazine about his thoughts on superhero films in October, a debate has raged on over the MCU’s artistic merits on social media and beyond. In a recent op-ed in The New York Times, Scorsese clarified his thoughts and discussed how in his view Marvel and DC’s blockbusters are a far cry from the auteur-driven work that inspired him to become a director and defined the era in which he came up.

“For me, for the filmmakers I came to love and respect, for my friends who started making movies around the same time that I did, cinema was about revelation — aesthetic, emotional and spiritual revelation,” Scorsese explained. “It was about characters — the complexity of people and their contradictory and sometimes paradoxical natures, the way they can hurt one another and love one another and suddenly come face to face with themselves.”

“Many franchise films are made by people of considerable talent and artistry. You can see it on the screen. […] I know that if I were younger, if I’d come of age at a later time, I might have been excited by these pictures and maybe even wanted to make one myself. But I grew up when I did and I developed a sense of movies — of what they were and what they could be — that was as far from the Marvel universe as we on Earth are from Alpha Centauri.”

Scorsese acknowledged that superhero films are capable of exhibiting many of the qualities that he values in cinema. But his problem with them is that they, and modern film franchises as a whole, are “market-researched, audience-tested, vetted, modified, revetted and remodified until they’re ready for consumption.”

Best of/Worst of 2019: ”Wonder Woman“ and ”Guardians of the Galaxy“ rank among the decade’s finest superhero movies