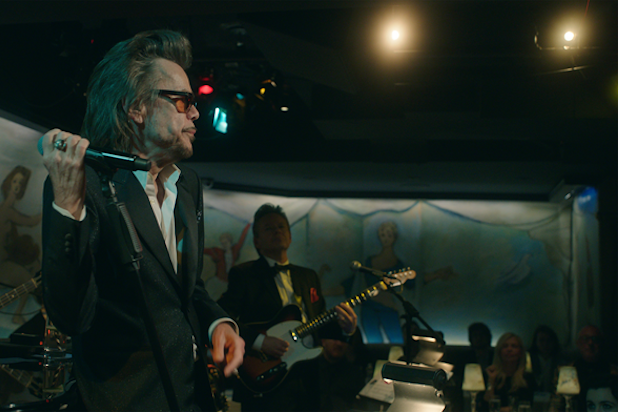 The untitled documentary will follow the life and career of Johansen, a Staten Island native who got his music career started as a 16-year-old in the midst of the 60s counterculture wave in New York’s East Village. Over the next three decades, he would build a discography across multiple genres, starting in the 1970s as lead singer for the punk/glam pioneers the New York Dolls, continuing with the swing revival surge as Buster Poindexter in the 1980s and digging deep into the blues with the Harry Smiths in the 1990s.

“It is an honor for all of us at Showtime to be working with Martin Scorsese, who unquestionably stands as one of the greatest filmmakers of our time,” said Showtime’s Nonfiction Programming EVP Vinnie Malhotra in a statement. “Over the past few decades his documentary work has taken us inside the lives of some of the most iconic musicians, from The Band to The Rolling Stones to Bob Dylan, and now David Johansen and the New York Dolls.  Johansen’s story transcends the walls of music and is a window into the art and cultural evolution of New York City.”

“I’ve known David Johansen for decades, and his music has been a touchstone ever since I listened to the Dolls when I was making ‘Mean Streets,'” said Scorsese. “Then and now, David’s music captures the energy and excitement of New York City. I often see him perform, and over the years I’ve gotten to know the depth of his musical inspirations. After seeing his show last year at the Café Carlyle, I knew I had to film it because it was so extraordinary to see the evolution of his life and his musical talent in such an intimate setting. For me, the show captured the true emotional potential of a live musical experience.”

Also Read: Editor Thelma Schoonmaker Is Surprised by How Long 'The Irishman' Is Too

Scorsese will also executive produce with longtime partner Margaret Bodde producing through Sikelia Productions. Grazer and Howard will also serve as executive producers with Rick Yorn, and Mara Hennessey through Imagine Entertainment. In addition to Tedeschi, Ellen Kuras, who won an Emmy and earned an Oscar nomination for her 2009 documentary “The Betrayal,” will serve as director of photography. Justin Wilkes and Sara Bernstein will also produce through Imagine Documentaries.

Scorsese, who won a Best Director Oscar in 2007 for his Best Picture-winning film “The Departed,” received his 14th Oscar nomination this year for the 209-minute crime drama “The Irishman,” which received 10 nominations overall and was the first collaboration between the filmmaker and actor Robert De Niro in 24 years. Scorsese will collaborate again with De Niro on his next narrative film, Paramount/Apple’s “Killers of the Flower Moon,” which tells the tale of the bloody murders that took place in the 1920s over oil-rich lands in Osage County, Oklahoma. Leonardo DiCaprio, who starred in Scorsese’s “Shutter Island” and “The Wolf of Wall Street,” will also star.

Scorsese is repped by WME and LBI Entertainment.