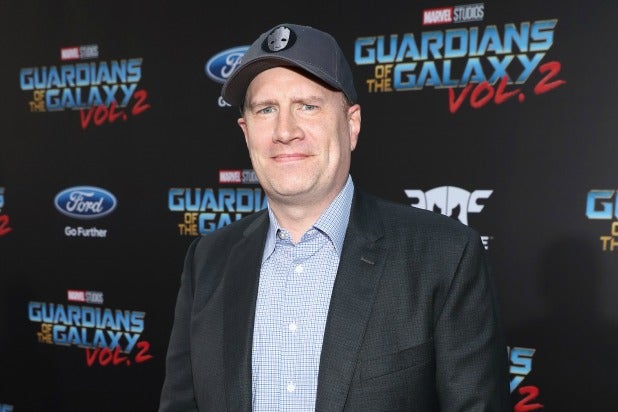 Kevin Feige at The World Premiere of Marvel Studios Guardians of the Galaxy Vol. 2. at Dolby Theatre in Hollywood, CA April 19th, 2017

In a new interview, Feige was asked, “Is that the grand plan, to get all the Marvel characters back at some point under under one umbrella?”

“Yes, of course!” said Feige. “My goal is to replicate the experience that comic book fans have reading the books up on the screen and we’ve been able to accomplish that beyond my wildest dreams over the last ten years. And certainly, including Spidey in ‘Civil War,’ in the upcoming ‘Infinity War,’ is yet another dream that I didn’t even dare to talk about publicly because I thought the odds of it were very slim.”

Feige goes on to add, “So, no plans beyond that for the few remaining characters that aren’t already in the MCU, but never say never. Who knows what can happen in the future?”

Deadpool, the X-Men and the Fantastic Four are currently under 20th Century Fox. Spider-Man is a Sony property, and the Avengers universe, which includes Captain America, Iron Man, Thor, Ant-Man and Doctor Strange, is owned by Disney.