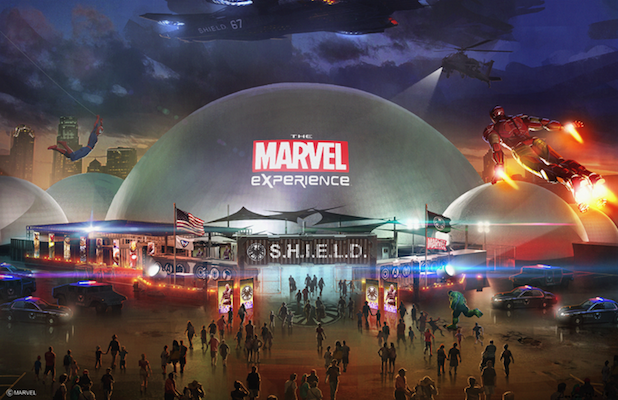 No need to panic when S.H.I.E.L.D. erects this giant complex of domes in your hometown: it’s not the sign of an impending Chitauri invasion, just “The Marvel Experience” bringing its own venue for the show.

Marvel and Hero Ventures announced the live touring event back in August, and on Tuesday released this first-look image (above) of the domed complex where the show will take place. The custom-built complex will stand more than six stories high, have a footprint of 2 acres and house interactive games, short films and a motion-based ride.

(Whether an actual helicarrier will float above it remains to be seen.)

The attraction is expected to stay for weeks at a time in each of its stops. Cities and dates haven’t been announced yet, but the initial announcement said it was planned for sometime this year.

“The Domes are central to the singular story line that pulses through The Marvel Experience and are enhanced by state-of-the-art design applications and graphic elements,” said Doug Schaer, COO of Hero Ventures. “The interior will feature an exaggerated comic-style utilizing projected high-tech imagery, amazing fabricated set pieces and virtual simulations to advance the story. Our guests will be interacting directly with multiple Marvel Super Heroes, as well as members of S.H.I.E.L.D., as they take their place in the Marvel Universe.”