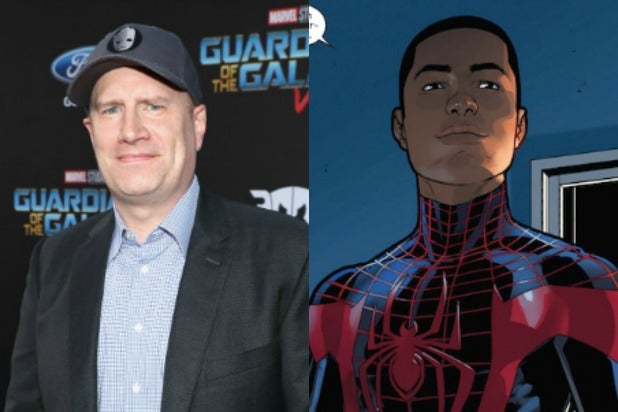 The junket for “Homecoming” took place over the weekend and in a new interview with Screencrush, Feige discussed the nephew of Donald Glover’s Aaron Davis — a character who hardcore fans know is the uncle of Miles Morales in the Marvel Comics. Feige was asked if Davis mentioning his nephew in the film was an easter egg or if fans can see Morales down the line. “All of those little things are just Easter eggs for fans until they’re something more than that,” said the top Marvel exec, adding, “But anything that’s happened in the books is potential material for us.”

“In the meantime, I think Miles is a big part of the animated movie that Sony’s making. But where we go… we definitely want you to go, ‘He’s there. He’s there somewhere,'” added Feige.

Miles Morales made his debut in the fourth issue of the “Ultimate Fallout” limited series, which was released on Aug. 3, 2011. He later starred in the relaunched “Ultimate Comics: Spider-Man” series, written by Bendis and drawn by Pichelli, in September 2011.

Heroic Hollywood first reported the news of Miles Morales being the focus of the untitled animated film.