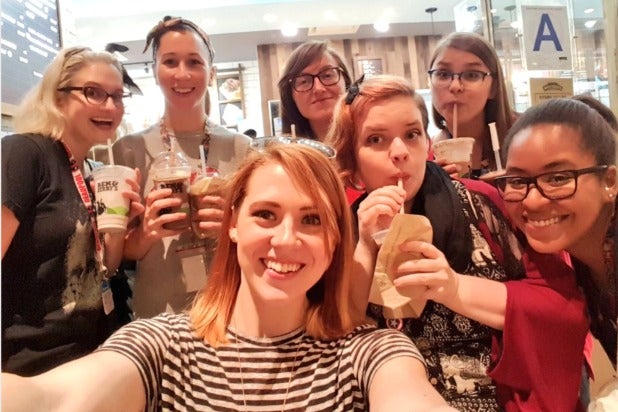 After Marvel comic editor Heather Antos was targeted by Twitter trolls for posting a selfie with some of her Marvel friends grabbing milkshakes, a groundswell of supporters are rising up in her honor.

The innocuous documented milkshake-gettin’ activity led naysayers on Twitter to attack Antos for being a woman in the comics industry. Antos got insults ranging from “Gee, I can’t imagine why Marvel’s sales are in the toilet” to “fake geek girls” and “the creepiest collection of stereotypical SJWs anyone could possibly imagine.”

But support for Antos was swift from comic fans around the country. So much support poured in, in fact, the hashtag #MakeMineMilkshake — a play on Marvel’s “Make My Marvel” slogan — started trending on Twitter, and, as Antos tweeted out Sunday, even crashed her Twitter app.

Guys… These #MakeMineMilkshake posts are bringing me so many feels. Your love and support is literally crashing my Twitter app.

Also Read: 17 Stars Who Went to Comic-Con in Disguise, From Justin Timberlake to Lupita Nyong'o (Photos)

Comic book purveyors from Seattle, Portland, Los Angeles, New York and beyond posted photos drinking milkshakes with their comics and the hashtag. “#MakeMineMilkshake because more women in comics is the best thing to ever happen to comics,” comic writer Ron Marz tweeted. “You’re crazy if you don’t think women have importance in comics. We’d be nowhere without them. #MakeMineMilkshake,” comic writer Brandon Davis added.

We’ve rounded up the 10 best #MakeMineMilkshake tweets below.

comics + milkshakes + solidarity make for a lovely Sunday afternoon.
we got your back, @HeatherAntos. ????✊️????#MakeMineMilkshake pic.twitter.com/AVxopsf9ai

Playing Dungeons and Dragons so we don't have milkshakes! But us girls love our Butterbeer! (Hope that is okay!) #MakeMineMilkshake pic.twitter.com/hLBl2eUlfC

Don't ever let someone tell you you don't belong in comics. Comics are for everyone. #MakeMineMilkshake pic.twitter.com/EzcQxfKZ2n