Fans have been waiting extra long for Phase 4 of the Marvel Cinematic Universe, and the wait is nearly over.

On Monday, Marvel Studios unveiled its full list of titles and release dates for each of the films it will release over the next three years, filling in some of the blanks that have kept fans guessing, including unveiling the first look at Chloé Zhao’s “Eternals,” revealing the titles for “Captain Marvel 2” and “Black Panther 2” and even dropping a few logos and release dates.

We’ve dropped the full calendar of dates below, but you can also get the full treatment as part of this teaser that’s an emotional tribute to theatrical movie going, here.

First up is “Black Widow,” which is directed by Cate Shortland and takes us back in time for a proper standalone film for Scarlett Johansson’s Natasha Romanoff. The film is set ahead of “Captain America: Civil War” and introduces new characters played by Florence Pugh, David Harbour and Rachel Weisz. It opens this July both in theaters and as a premium release on Disney+ after numerous pandemic-related delays.

“Shang-Chi” also recently released a full trailer, and Simu Liu takes up the title role in that film, which Destin Daniel Cretton is directing as Marvel’s take on a martial arts film. Awkwafina also stars in the movie opening Sept. 3.

After winning the Oscar for “Nomadland,” Chloé Zhao is following that film up with “Eternals,” which got its first footage this morning. The film looks back at an ancient civilization and race of immortal beings who helped shape the fabric of the universe. An impressive cast including Angelina Jolie, Gemma Chan, Salma Hayek, Kumail Nanjiani, Richard Madden, Kit Haringon, Bryan Tyree Henry, Lauren Ridloff and Barry Keoghan all star. “Eternals” opens Nov. 5. 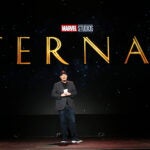 Finally is the third “Spider-Man” film “No Way Home,” which has director Jon Watts returning with the main cast led by Tom Holland. But his Peter Parker will now have to take on Spider-Man villains from other film universes, including Alfred Molina as Doc Ock and Jamie Foxx as Electro. It opens Dec. 17.

And that’s just 2021. The sequels for “Doctor Strange,” “Thor,” “Black Panther” and “Captain Marvel” round out 2022, and the news this morning was that “Black Panther 2” now has the title “Wakanda Forever” as something of a tribute to the late Chadwick Boseman. And “Captain Marvel 2” is now “The Marvels,” which suggests a team-up between Captain Marvel and Ms. Marvel, who is played by Iman Vellani and will make her debut in the Disney+ TV series of the same name.

2023 brings us “Ant-Man 3,” which is officially titled “Ant-Man and the Wasp: Quantumania” followed by “Guardians of the Galaxy: Vol. 3,” in which James Gunn is back in the director’s chair. And we don’t know much about the new “Fantastic 4” film, which remains undated, but is being directed by “Spider-Man” filmmaker Jon Watts.

Take a look at the full Phase 4 calendar below.