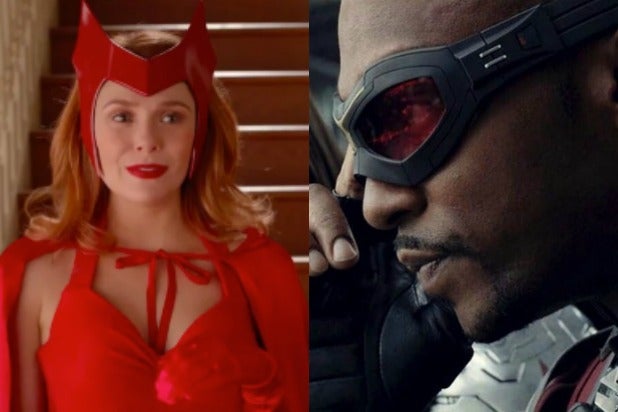 Marvel Studios is shuffling up its lineup of Disney+ series, moving “WandaVision” ahead of “The Falcon and the Winter Soldier.”

“WandaVision” reteams Elizabeth Olson and Paul Bettany as their Marvel Cinematic Universe characters Wanda Maximoff and Vision; the latter died in “Avengers: Infinity War” and was not among the many MCU characters revived in the follow-up, “Avengers: Endgame.”

Disney+ released the first trailer for “WandaVision” on Sunday during the Emmys on ABC and announced that it would be the first to hit the streaming platform. “The Falcon and the Winter Soldier,” which only this week resumed production, will now presumably premiere in 2021. Production was halted in the spring by the coronavirus pandemic.

You can watch the trailer for “WandaVision” here.

Also Read: Live-Action Series Based on Marvel Comics' Silk in the Works at Sony Pictures TV

“The Falcon and the Winter Soldier” stars Anthony Mackie and Sebastian Stan as Sam Wilson/Falcon and Bucky Barnes/Winter Soldier. It is also set to see the return of MCU actors Daniel Bruhl and Emily Van Camp. Russel Wyatt will also star as John Walker/American Patriot.

Along with Bettany and Olsen, “WandaVision” will feature the debut of Teyonah Parris as the adult version of Monica Rambeau. Kat Dennings, Randall Park and Kathryn Hahn will also be part of the series’ cast.

The other series from Marvel Studios are “Loki,” “Hawkeye,” the animated “What If…,” “Ms. Marvel,” “Moon Knight” and “She-Hulk.” “Orphan Black” star Tatiana Maslany was tapped to portray Jennifer Walters/She-Hulk.