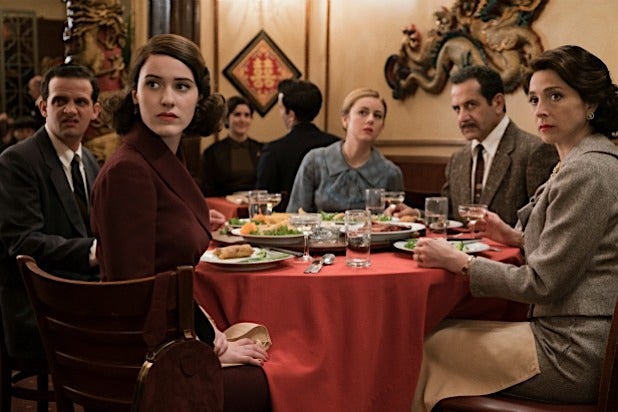 If the cast and crew of “The Marvelous Mrs. Maisel” take home a Golden Globe on Sunday, it will obviously be great for Amazon Studios, the performers and creator Amy Sherman-Palladino. But at this moment in time, it’s also great for those of the Jewish faith. And perhaps even necessary.

Anti-Semitism is, once again, rearing its ugly head around the world: A gunman killed 11 people and injured seven others during a Shabbat service last October at a Pittsburgh synagogue. The Cleveland Clinic fired a resident after she made anti-Semitic comments on social media and threatened to give Jewish people “the wrong meds.” And according to the New York Times, even the Women’s March movement has become embroiled over accusations of anti-Semitism by some of its organizers.

Hollywood figures have not been immune. Hate-filled graffiti (“Kill All Jews”) forced Ilana Glazer, one of the stars of Comedy Central’s “Broad City,” to cancel a midterm election event at a Brooklyn synagogue.

Amid all this, much of America is falling in love with a brash Jewish woman who, against all odds, follows her dream of being a standup comic. Midge Maisel is neither your typical Jewish mother (though she has one) nor the Jewish princess she often mocks on stage. (When a heckler tells her to go home and clean her kitchen, Midge responds, “I pay someone to do that.”)

While the series may not explicitly be about religion, and places itself in the late 1950s, Judaism infuses every frame, every hallah-day, every summer in the Catskills. This past season, Midge had to decide between staying at a Yom Kippur dinner with her family or sneaking off to a gig. (She did the gig.) And amazingly, the series not only feels funny and fresh, but #MeToo current. Here, after all, is a sharp-tongued woman finding her self-confidence, staying true to herself and standing up to the men in her life.

The show isn’t the only one to grapple with the Jewish faith. ABC has the ’80s-set sitcom “The Goldbergs” and Amazon provided a televised home to the Pfefferman clan for four seasons on “Transparent.” Yet it’s worth remembering that there was a time when, aside from comedians like Milton Berle, and, later, many Holocaust-themed movies of the week, few networks dared to go too Semitic.

Lynne Littman, who won an Oscar for her 1976 short “Number Our Days,” about a group of elderly Jews living in Venice, Calif., recalled that when she was approached by a network to adapt it into a series one executive asked, “But do they have to be Jewish?”

The same year that “Seinfeld” debuted in 1989, “Anything But Love” creator Wendy Kout said she pitched her pilot to an NBC executive (also Jewish, by the way) who explicitly told her the lead male character couldn’t be named Marty Gold.

“He told me, ‘They [the audience] don’t like us out there,'” Kout recalled. “I told him, ‘Well, maybe if there were more of us in their living rooms, they’d learn to love us.'” She refused to make the change, NBC passed on the series and ABC picked it up right away — with Richard Lewis cast as Marty Gold.

“I have always loved well-crafted, non-stereotypical sitcoms featuring actors from every race and religion,” said Lewis, who later became a regular on Larry David’s “Curb Your Enthusiasm.” “When I was co-starring with Ms. [Jamie Lee] Curtis in ‘Anything but Love,’ I never held back my Jewishness. In fact, I figured if King Solomon could marry an Egyptian, I could be allowed to make love to a brilliant, beautiful Gentile.”

Leslie Bennetts, author of the 2016 Joan Rivers biography “Last Girl Before Freeway,” credits “Mrs. Maisel” for a recent uptick in sales — and indeed there are many parallels between the fictional Mrs. Maisel and the barrier-breaking comic who emerged at roughly the same time. “Jewishness was one of [Joan’s] most important formative experiences, and it never left her,” Bennetts said.

There are other signs of hope. This week’s newly crowned Rose Parade Queen, Louise Siskel, shared that she was said proud to be Jewish. “I feel an additional responsibility to myself, and to this tradition, to share that I am bisexual,” she added.

All those Midge Maisels, standing up for themselves in 2019, must be kvelling.

From ”The Good Place“ to ”The Kominsky Method,“ which TV nominees would benefit most?