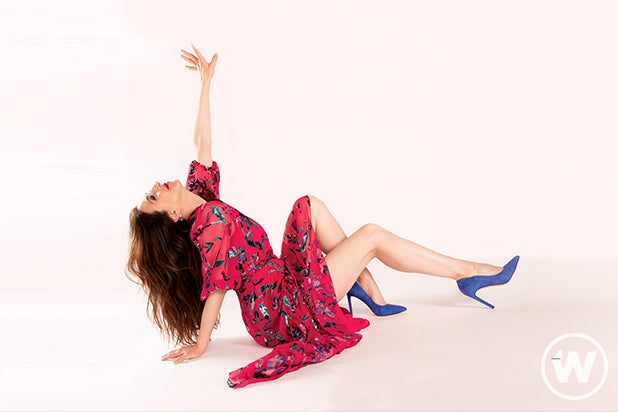 This story about “The Marvelous Mrs. Maisel” star Marin Hinkle first appeared in the Comedy/Drama/Actors issue of TheWrap’s Emmy Magazine.

Marin Hinkle is all confidence, poise and elegance on Amazon’s “The Marvelous Mrs. Maisel” as Rose Weissman, mother of Rachel Brosnahan’s eponymous Miriam “Midge” Maisel and wife of Tony Shalhoub’s math professor Abe Weissman. But the veteran of “Two and a Half Men” insists she is anything but that off screen.

“I don’t think I’m like Rose at all,” she said. “I think I’m a disheveled human.” She looked at her photo-session outfit. “No, I really am. This took a lot, to get a beautiful dress that someone kindly helped facilitate, and hair and makeup. Rose is the opposite. She’s very put together. She is very precise in her thinking. She can be kind of controlling, and I think that I tend to be a lot looser.”

In order to become Rose, Hinkle drew on people who inspire her.

“When I play her, I have to conjure up women in my life, whether it was the theater teacher, or one of my ballet teachers, or my mother or my mother-in-law — these are a compilation of women who are much more put together and much stronger, I think, than I am,” she said.

“So when I put Rose’s wig on and put on those amazing costumes, I really have to transform. I don’t find myself very similar to her, but I love her, and I love the idea that I get to play someone so far from myself. That’s one of the joys of being an actor, and in this case, she’s really different from Judith on ‘Two and a Half Men’ or this other character that I play on ‘Speechless,’ who’s this adorable daffy principal who’s very nervous. I love that I can be someone [as] different as Rose.”

When it comes to empowered women, the set of Maisel is never in short supply. Hinkle also listed her co-stars and the show’s creator, Amy Sherman-Palladino, as sources of strength.

“I try and watch Amy because she is so funny and smart and at times irreverent,” she said, also crediting co-stars Brosnahan and Alex Borstein, who plays Midge’s manager as she embarks on a professional comedy career in the early ’60s.

Even her own character has become an inspiration.

“I can do with a little more of her toughness, and I think hopefully as I continue in my life, I’ll take her on.”

As for where what Rose will be up to in Season 3, she can’t say — but she can hope.

“I have dreams, I have all this hope that I could be in scenes with Susie and could watch my daughter [Midge] perform,” Hinkle says. “I can imagine her taking a cigarette and just trying her hardest to pretend that it’s at a parlor for tea parties rather than actually a comedy club with lewd and exciting, off-kilter men.”

Read more from the Comedy/Drama/Actors issue of TheWrap’s Emmy Magazine.