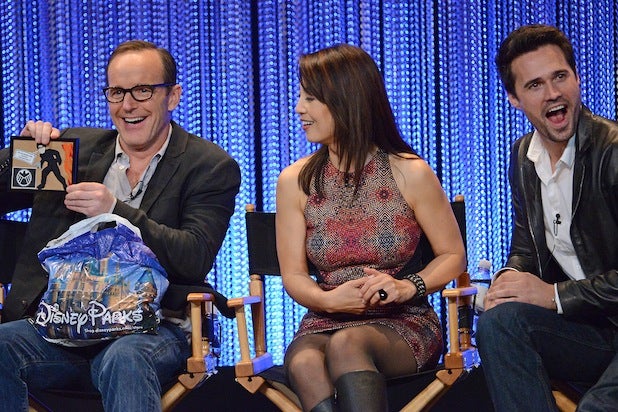 The producers of ABC’s hit “Marvel’s Agents of SHIELD” teased its upcoming crossover episode with “Captain America: The Winter Soldier” during the show’s PaleyFest panel on Sunday at L.A.’s Dolby Theater.

Extremely tightlipped about what the episode will contain, executive producer Jeph Loeb avoided any real spoilers. It will air Tuesday, April 8 after “Captain America” hits theaters on Friday, April 4.

“It makes sense,” Loeb teased. “It would certainly not surprise anyone if things did happen from the movie that we’re mentioning on the show that we’re talking about.”

Previously in another Marvel act of synergy, the company aired a crossover episode with “Thor: The Dark World” and “SHIELD” last November, which portrayed the aftermath of the movie’s events. And, the show was visited by Lady Sif (Jaimie Alexander) from the “Thor” franchise on the March 11 episode.

When asked by an audience member if any of the “SHIELD” characters will be in “Winter Soldier,” Loeb avoided answering the question and directed them once again to watch the movie.

In other news, the series returns on Tuesday, April 1 for its next new episode and then six more uninterrupted new episodes straight through to the season finale.

Here are some other great moments from the PaleyFest panel:

– Clark Gregg on reprising Coulson for TV: “I found myself suddenly free.”

– Executive producer Maurissa Tancharoen revealed that Ming Na’s character was originally named “Agent Rice.” But, that didn’t seem quite right after Na got the role.

– Tech wizzes Fitzsimmons was based on Casey Affleck and Scott Caan‘s characters in “Ocean’s Eleven,” but Elizabeth Henstridge came in and stole the role.

– When the topic of upcoming romantic hookups came up, Chloe Bennet says she and Elizabeth Henstridge ship “Skimmons” (a Skye and Simmons hookup).

– Ming Na suggested that that Skye should be the lovechild of her character and Thor and wants the show to have flashbacks to those love scenes.

– Brett Dalton gets cheeky when asked if he’s seeing his character becoming closer to the team. “The character has changed. He wasn’t a team player at the start. He’s learned to play with the team,” he said with a nod to his character’s sexual exploits.

– One fan busted Bennet on her previous career as a Chinese pop star. True story, she confirmed.

– When asked if mutants will ever join the show, Loeb answered, “There’s no proof of mutants in the Marvel Universe yet.”