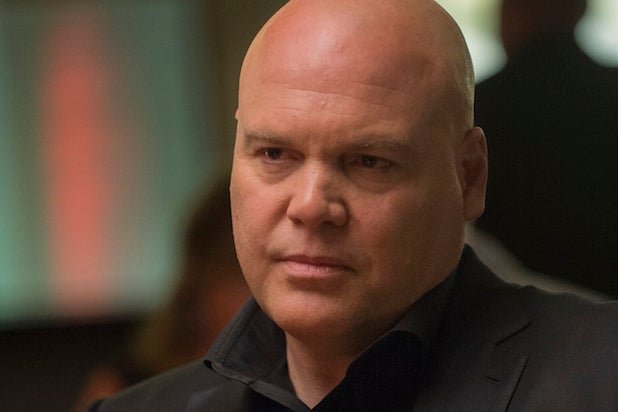 Fisk has one mission in mind: to save his neighborhood by any means necessary, no matter the cost. This immediately puts him at odds with Matt Murdock’s (Charlie Cox) vigilante alter-ego (Daredevil), who also seeks to protect the city — but sees its criminal element as the root of the city’s problems. Central to the conflict is that Fisk truly believes he’s doing good for Hell’s Kitchen and at times may seem more of a hero to its people than Daredevil.

Intelligent, complex and physically imposing, Wilson Fisk is the perfect foil for Murdock, and the two will collide dramatically, the comic book company stated.

The Netflix series tells the origin story of Murdock and his aforementioned costumed alter-ego. Blinded as a young boy but imbued with extraordinary senses, Murdock fights against injustice by day as a lawyer, and by night as a superhero in modern-day New York City.

The Marvel series is the the first of four epic live-action adventure series, which also include “Marvel’s A.K.A. Jessica Jones,” “Marvel’s Iron Fist” and “Marvel’s Luke Cage,” and all lead up to the teaming of the main characters in “Marvel’s The Defenders.”

“Daredevil” is executive produced by series showrunner Steven S. DeKnight and Drew Goddard, along with Mavel’s Head of Television Jeph Loeb. The series is produced by Marvel Television in association with ABC Studios for Netflix.

The 13-episode Season 1 of “Daredevil” will drop on the streaming platform April 10.

Here is the first-look photo: