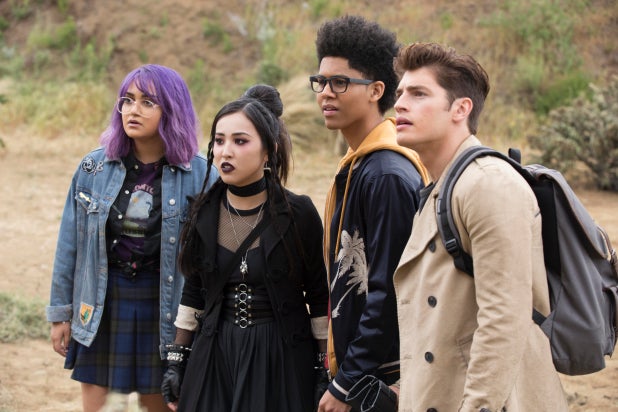 Hulu’s “Runaways” may have taken its entire first season to set up the premise of the show, which sees six teenagers on the run after they discover their parents are part of a secret evil organization, but the Marvel series will kick off its second season taking its name a bit more literally.

“We actually pick up the second season with us running — literally,” Gregg Sulkin, who plays Chase Stein on the series, tells TheWrap. “You’re going to see how six diverse, privileged Brentwood kids adapt and deal with living life outside their comfort zone and on the street.”

At the end of the first season, the six teenagers were forced to flee their homes after being framed for the murder of Destiny Gonzalez, a fellow teenager that was actually murdered by Victor Stein, Chase’s father, after a failed sacrifice attempt by the PRIDE (the evil organization the parents belong to).

The second season, which debuts on Friday, dives deeper into the Marvel Comics series from Brian K. Vaughan. Now that the central band of teen superheroes has been forced into hiding, they’re left with only each other to rely on as they try to put a stop to their parents’ evildoings. And since the teenagers are now officially “runaways,” they’ll be tested being outside of the comforts of their Brentwood surroundings.

“When you grow up in Brentwood, you’re accustomed to a certain lifestyle,” Sulkin continues. “They’re going to struggle.”

But it helps when you have superpowers, whether it’s genius-level intelligence, being a Wiccan or having a telepathic link with a dinosaur. For Chase, he’s essentially a mad scientist, like his father, and Sulkin is excited to unveil his bigger and better Fistigons.

“Chase has had some time to tinker with them,” Sulkin says, adding that there are “some new effects” this season. Considering they were already two metal gauntlets that came built with flamethrowers, one can only imagine what Chase added to them. “They’re definitely out in full force this season because he’s going to need them.”

This show being about teenagers means that, along with dealing with that whole “being on the run from the cops” thing, they also have to come to terms with the more normal aspects of adolescence. For Chase and Gert (Ariela Barer), that means starting a romantic relationship in what is probably not the best of circumstances.

“Falling in love is one thing, falling in love on the streets, without a clean shower, is another,” Sulkin adds. “This is two teenagers in love, in very heightened and dramatic circumstances, which, as a result, causes tension and friction in their relationship.”

And you thought high school was rough.

The second season of “Marvel’s Runaways” will be available on Friday, Dec. 21 on Hulu.