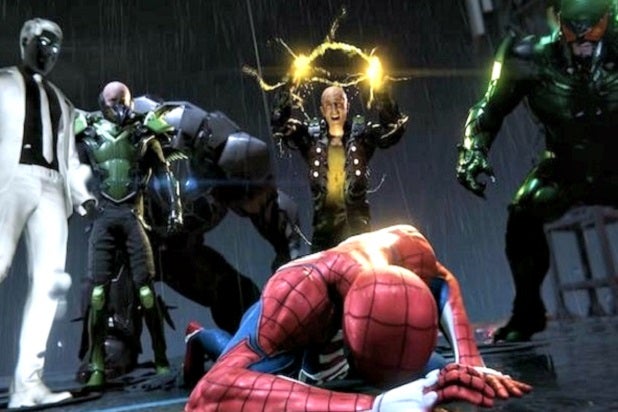 (Note: This post contains significant spoilers for the story of “Marvel’s Spider-Man”)

The newly-released “Marvel’s Spider-Man” video game tells a unique story in the lore of the web-slinging superhero. Taking place eight years into Spidey’s career, it finds Peter Parker at a time when he’s wondering if he might not do more good in the world without wearing the Spider-Man mask.

Things get turned on their heads, though, as they often do in games and superhero stories, when a series of supervillains tries to wreck New York City. Spidey battles all of them, but not before learning a whole lot about their motivations, and about some secret science stuff that relates to a lot of characters in the Spider-Man lore. The end of the story sees two extra scenes pop up after teh credits, Marvel Cinematic Universe-style, that point toward the possible future of the game franchise’s storyline.

(Massive spoilers beyond this point!)

The first scene is a fairly straightforward one that builds on a character and relationship players see develop throughout the game. As Spidey is fighting the Sinister Six and trying to stop their plans of destroying Norman Osborn and New York, he also encounters and becomes friends with Miles Morales. Spider-Man fans know that Miles eventually becomes Spider-Man himself, and “Marvel’s Spider-Man” functions as an origin story for the character.

During the course of the game, Miles gets bitten by a spider that hitched a ride on Mary Jane Watson’s shoulder, after she ventured into Norman Osborn’s secret lab. The implication is that we’re seeing how Miles got his powers — bitten by a radioactive spider, just like Peter. In the post-credits scene, Miles reveals to Peter he’s been going through some changes. Before Peter can launch into a speech about puberty, Miles leaps on the ceiling to demonstrate what he’s talking about. Peter joins him there, and the scene ends with fans realizing there are now two Spider-Men in the world of “Marvel’s Spider-Man.”

Meanwhile, if the first scene is about a future hero, the second post-credits scene teases future potential villains.

While working through “Marvel’s Spider-Man,” we learn that Harry, Peter Parker’s best friend and Norman Osborn’s son, has been traveling in Europe for the past year. As it turns out, that was a ruse. Harry was actually receiving medical treatment in Europe for a degenerative genetic disease he suffers from, which also killed his mother, Emily. In the post-credits scene, we find out what really happened to Harry — Osborn has him in a strange tank in his secret lab, where he’s trying to treat Harry’s disease.

The rest of the game explains why the treatment might be even worse, though. Years earlier, Osborn and his then-partner, Otto Octavius, worked on a substance they hoped would allow them to rewrite genetic abnormalities in patients, thereby curing basically all disease. Osborn was obsessed with the research because he hoped to use it to save his wife.

While Osborn and Octavius researched their cure, they used it to treat a young boy named Martin Li. The cure changed Li, or else activated some latent mutant power, and energy exploded out of him, killing the boy’s parents. Li blamed Osborn for his parents’ deaths, and would struggle for the rest of his life trying to balance the dark power within him against his better nature. He eventually succumbed to his darker impulses to become the villain Mister Negative.

Also Read: 'Avengers: Infinity War' -- Here's Why Spider-Man Took Longer to Disappear Than Everyone Else

The incident with Li caused Octavius to split from Oscorp and form his own company, but Octavius struggled to find success for years, and came to hate Osborn for his misfortune. Meanwhile, Osborn and Octavius never finished the cure. In its unfinished state, the substance, which comes to be nicknamed “Devil’s Breath,” is basically a bioweapon — a highly contagious disease that’s very difficult to cure. Rather than destroy Devil’s Breath, Osborn secretly continued to work on the cure, working with organized crime boss Wilson Fisk to create a secret, illegal lab where he could continue his research.

After Fisk is arrested, villains try to use Devil’s Breath against New York in order to expose Osborn’s unethical and criminal practices, but Spider-Man manages to stop them and save the city.

The reason Osborn has been working so diligently on Devil’s Breath, even though it’s illegal and incredibly dangerous, is because he’s obsessed with trying to save Harry from the fate his mother suffered. We see that Harry is still being treated with a form of Devil’s Breath at the end of the game. But since we saw what the substance did to Li, it’s a fair bet that Harry won’t come out of his treatment fully healed, or even as the same person who went in.

The post-credits scene shows Harry covered in some sort of substance that spreads out from him toward the edges of the tank he’s suspended in like a web. When Osborn puts his hand on the glass, it’s not Harry’s hand that appears on the other side, but some of that webby stuff. It seems that Harry is already changed by the treatment, and who knows what it’s actually doing to him.

Though he’s not a supervillain in the game, but just a regular rich bad guy, we know from Spider-Man lore that Norman Osborn eventually becomes the villain known as the Green Goblin. Harry also follows in his father’s footsteps as the second Green Goblin after Norman’s death, so we might be witnessing the origin of one or both villains in the post-credits scene — and “Marvel’s Spider-Man” might be providing a big hint for who players will battle in a potential sequel.