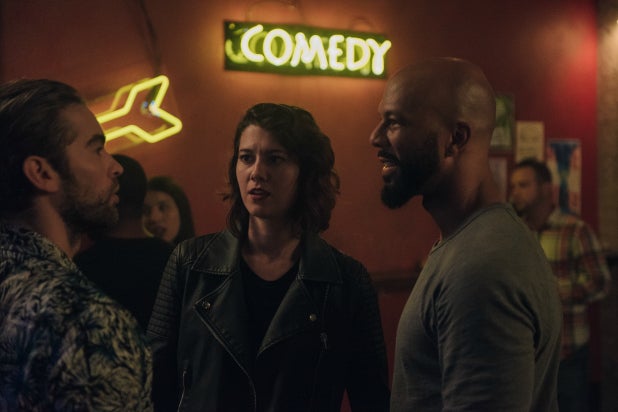 In “All About Nina,” Mary Elizabeth Winstead plays Nina Geld, a smart, angry and often vexing stand-up comedian on the rise. But, her life is a mess: Her romantic relationships are toxic and she has demons in her past that need exorcising. And it just so happens, that’s exactly what piqued Winstead’s interest about the project.

“As an actress, you’re often tasked with fitting into some sort of mold that pleases everybody all the time both on and off screen. The fact that she’s not always likable is probably one of the main things that drew me to the role,” Winstead told TheWrap during a recent phone interview. “It was kind of liberating to get this opportunity to play a character that’s unapologetic in the way that she behaves and the way that she acts and the way that she is on stage, even if she’s sort of wrestling with her demons and she may have some things she needs to work through.”

“All About Nina,” in theaters now and by indie distributor The Orchard, was written, directed and produced by first-time feature director Eva Vives, who gives Winstead a lot to chew on and a lot to say, in a myriad of provocative ways.

Also Read: 'All About Nina' Film Review: Mary Elizabeth Winstead Kills as a Stand-Up With Issues

Nina is unapologetic and independent, sure, but she is also acrimonious, on edge and often not at all likable. Not until a major late-act revelation during a crucial stand-up set for Nina is the audience clued in to why and what the demons are that Nina is working through.

“That’s to me exciting as an actor to get the opportunity to work through those things alongside her and with her,” Winstead said of playing Nina. “It’s an incredible time, really, and I feel like in some ways this movie, as well as ‘Nanette’ and other projects coming out right now, and the conversations that are happening, captures that exciting shift that’s in the air that’s also a little bit uncomfortable, you know?” she added.

Winstead is making a conscious decision now more than ever to work with filmmakers whose voices she said deserve to be heard and previously haven’t been. She said she’s often drawn to female characters in films who have substance, who are strong and have complexity — otherwise her heart’s just not in it, she said.

Winstead was recently cast as The Huntress in Warner Bros. all-female superhero team-up “Birds of Prey.” Winstead will star in that film alongside Margot Robbie and Jurnee Smollett-Bell, and it’s being directed by Cathy Yan (“Dead Pigs”) from a script penned by Christina Hodson, who is also writing “Batgirl” for the studio.

Winstead told TheWrap that meeting with Yan, testing with the other actresses and the prospect of working with so many women has been an extraordinary experience so far, and one of the things that drew her to that project.

“These roles just tend to find me and it really just brings me a lot of joy to be able to bring these characters to life. It tends to be all I’m really good at, but I love them so it’s cool,” Winstead said. “Hopefully more and more women and people of all backgrounds get their voices on screen. That’s something I’m really excited about.”