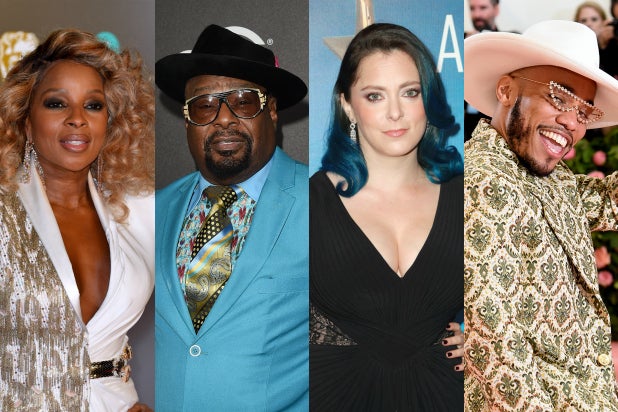 Mary J. Blige, Rachel Bloom, Anderson .Paak and funk legend George Clinton are packing their bags and going on tour as trolls — well, their voices are.

Universal Pictures announced on Wednesday that Blige, Bloom, Clinton and Paak have joined the voice cast of “Trolls World Tour,” the follow-up to the studio’s 2016 animated feature “Trolls.”

The first film grossed $346.9 million worldwide, and actors Justin Timberlake, Anna Kendrick and James Corden return to voice their characters for the sequel.

In “Trolls World Tour” Poppy (Kendrick) and Branch (Timberlake) go on an adventure that will take them well beyond what they’ve known before, as they discover that they are but one of six different Troll tribes scattered over six different lands and devoted to six different kinds of music: funk, country, techno, classical, pop and rock.

Also Read: Women in Animated Films Make Up Only 17% of Lead Characters

“Trolls World Tour” is being directed by Walt Dohrn, who served as co-director on “Trolls,” and is produced by returning producer Gina Shay. The film is co-directed by David P. Smith and co-produced by Kelly Cooney Cilella, both of whom worked on the first “Trolls.”

“Trolls World Tour” will also feature original music by Timberlake, who earned an Oscar nomination for his song “Can’t Stop the Feeling!”

17 Stars Who Flexed Their Right to Vote in the Midterm Elections, From Taylor Swift to Justin Timberlake

If they can make it to the polls, you can too

Show-business notables including Jeff Goldblum and Mindy Kaling took time out from their entertainment duties on Tuesday to cast their votes in the midterm elections, and to encourage others to do the same. From tweets boasting poll selfies to the classic "I Voted" sticker pose, these stars have shared their voting status and their reasons to vote. Posing in a suave black leather jacket and hat, actor Jeff Goldblum proudly wore his "I Voted" sticker on Instagram. In his post caption, Goldblum included an inspirational quote from the fictional President Thomas J. Whitmore from the 1996 film "Independence Day." https://www.instagram.com/p/Bp1_-bKFqHh/ Though "Sex and the City" star Cynthia Nixon lost to fellow Democrat Andrew Cuomo for the New York gubernatorial race in the November primaries, she still voted "because the patriarchy isn't going to dismantle itself." https://twitter.com/CynthiaNixon/status/1059873860995178497 In a short Twitter video, Zendaya showed off her sticker, asking followers if they've also fulfilled their civic duty. https://twitter.com/Zendaya/status/1059592563982651392 Comedian John Mulaney, known for stand-up specials like "The Comeback Kid," stood alongside his wife Annamarie Tendler in an Instagram post showing off their "I Voted" stickers.

https://www.instagram.com/p/BppjVm-nY9W/?utm_source=ig_embed W. Kamau Bell posed with his official vote-by-mail ballot. https://twitter.com/wkamaubell/status/1059893637390028800 Even an ocean away from her New York home, Madonna managed to vote in the midterms. https://twitter.com/Madonna/status/1059871641298239489 Mindy Kaling thanked the 14th and 19th Amendments for giving her the chance to vote. https://www.instagram.com/p/Bp2Bo2knjXz/?utm_source=ig_embed Musician Conor Oberst posed in front of the polls in a Tuesday Tweet. "Hope lives," added Oberst to his Tweet. https://twitter.com/conoroberst/status/1059877792299565057 And for those of you who are still questioning whether your vote truly matters, Jennifer Garner had a message for you. https://www.instagram.com/p/Bp0qSH5F6n2/?utm_source=ig_embed