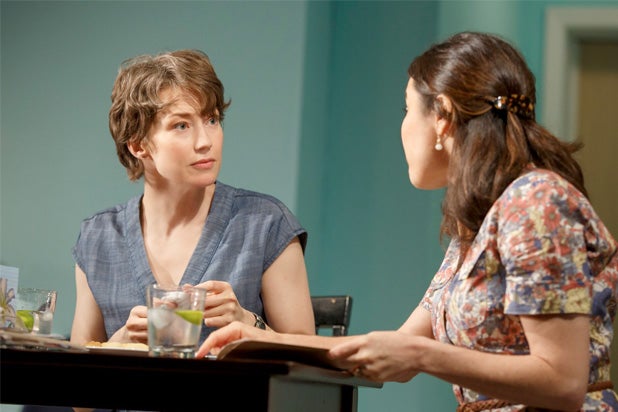 Amy Herzog’s “Mary Jane” is a character study of an extraordinary woman — the single mother of a two-and-a-half-year-old son with cerebral palsy — that resists every temptation to veer into sentimentality or histrionics.

Buoyed by a radiant performance by “Fargo” and “The Leftovers” star Carrie Coon, “Mary Jane” emerges as a sharply observed character study of a woman who is heroic in the ordeal she faces down and in her forthright, almost chipper attitude — and who would shrug off the label “heroic” it it were uttered in her presence anyway.

Director Anne Kauffman’s skillful production, which opened at Off Broadway’s New York Theatre Workshop on Monday after a run last spring at Yale Rep with a different cast, reinforces the virtues of Herzog’s characteristic understatement.

Herzog is a naturalist, an approach to storytelling she deploys here not in the service of plot but in the gradual revelation of Mary Jane as a character. We learn only gradually about her son Alex’s medical condition, what has happened to Alex’s father and how she manages to hold a job (barely, and then not at all) despite ill-timed medical emergencies — the exposition that most playwrights would be tempted to unload upfront before getting to the meat of the story.

Instead, she and Coon reveal the particulars of Mary Jane’s predicament gradually — and the accumulated force of them builds as a compelling substitute for onstage incident, packing quite a wallop by the play’s oblique ending.

Coon is joined on stage by four other performers, notably all female: Brenda Wehle as a superintendent and hospital chaplain; Danaya Esperanza as a college student and music therapist; Susan Pourfar as two mothers who have children with similar chronic illnesses but considerably more economic means; and Liza Colon-Zayas as a home-care nurse and a slightly brusque doctor.

That scene with the doctor, set in a break room as Mary Jane wolfs down some cereal, marked the one discordant note: Coon’s Mary Jane has seemed so reasonable, so pulled-together-despite-the-odds that the doctor’s apparent curtness seemed out of proportion to the energy she’d been given. (The fact that the doctor addresses her not by name but as “Mom” and praises her for “advocating for your kid” is just another one of the show’s spot-on observations about coping with serious illness.)

We soon begin to see more chinks in Mary Jane’s facade — and the tiredness radiates from Coon as strongly as our good will. Coon is the perfect partner for Herzog’s unfussy naturalism, delivering an indelible performance of a woman pushed to the edge of her abilities, with no easy answers and no easy way out.