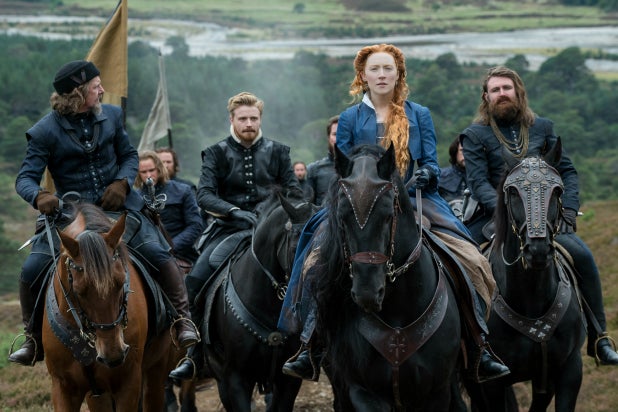 Though there were no wide releases this weekend, the indie box office was very busy, as “Mary Queen of Scots,” “Vox Lux” and “Ben Is Back” made their Los Angeles/New York debuts… and the results are mixed.

Of the three films, the strongest opening went to Focus Features’ “Mary Queen of Scots,” which made $200,000 from its four-screen opening for a $50,000 per screen average. That’s the mark that December specialty films are looking for. While summer indie releases can do well with a $10,000-$30,000 opening average, the December market is far more crowded. An opening of less than $50,000 is likely a sign that the film is going to fizzle out quickly, as arthouse moviegoers go for other more acclaimed films.

But even with this strong start, “Mary Queen of Scots” is not guaranteed to hold on as Christmas draws closer. The film failed to earn any Golden Globe nominations this week, and critical reception has been good but not spectacular with a 68 percent Rotten Tomatoes score. With major awards contenders like Annapurna’s “If Beale Street Could Talk” and “Vice” coming soon — the latter earned a surprising six Golden Globe nominations — “Mary” could find itself squeezed out.

Josie Rourke’s feature directorial debut, “Mary Queen of Scots” stars Saoirse Ronan as the Catholic monarch, who returns from France after the death of her husband to try to establish her rule over Scotland only to have her reign sabotaged by the religious and sexist prejudices of men, a hurdle that also plagues Queen Elizabeth (Margot Robbie), who is being pushed by Parliament in England to fight against Mary’s claim to the throne. Jack Lowden, David Tennant and Guy Pearce also star, with the screenplay written by “House of Cards” creator Beau Willimon.

While those are decent numbers, they are far below those of previous award season entries from these studios and actors. Portman’s last major prestige film, “Jackie,” earned her an Oscar nomination and opened to an average of $55,000 on the first weekend of December in 2016, double that of “Vox Lux.”

As for “Ben Is Back,” its opening average is far less than the last Roadside Attractions release starring Hedges, “Manchester by the Sea,” which earned an opening average of $64,000 two years ago. It’s also well short of the opening average of another Hedges film that came out last month, “Boy Erased,” which posted a $41,400 per screen average.

Fox Searchlight’s “The Favourite” expanded to 91 screens this weekend after earning five Golden Globe nominations and is still performing regally, grossing $1.43 million for a per screen average of $15,714. With just under $3.5 million grossed overall so far, the film will expand nationwide to around 525 screens in 75 domestic markets.

Finally, Fox Searchlight saw two more films hit milestones this weekend. “Can You Ever Forgive Me?”, which earned nominations for stars Melissa McCarthy and Richard E. Grant, is approaching the $7 million mark after earning $245,000 in its eighth weekend. Meanwhile, Robert Redford’s swan song “The Old Man & The Gun” has reached $11 million after 11 weekends in theaters.