Iranian journalist and women’s rights activist Masih Alinejad is speaking out after a man armed with an AK-47 was arrested outside her home in Brooklyn. In a new interview with CNN, she alleged the Islamic Republic of Iran was targeting her for her work.

“My voice is more powerful than their weapon,” she said, adding that she has moved through several safe houses throughout the past year and immigrated to the United States to seek safe haven from the Iranian government.

On Thursday, 23-year-old Khalid Mehdiyev was arrested by the New York Police Department after he drove through a stop sign and was found driving without a license. According to The New York Times, law enforcement saw the suspect waiting in his car outside Alinejad’s home for two days prior to the arrest, and later searches of the vehicle found the loaded machine gun with additional rounds and more than $1,000 in cash in a briefcase.

Alinejad has been an outspoken critic of the Iranian government and the Taliban in Afghanistan, condemning Iran’s abuses to her 7.2 million followers on Instagram. In 2020, she wrote that officials there had started a social media campaign calling for her abduction from the U.S.; last year, four Iranians were charged with attempting to kidnap her and send her to Iran. 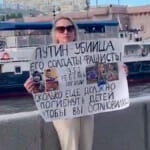 “Just imagine if the guy had open[ed] fire, who knows how many of my neighbors would have been killed, my beautiful and supportive neighbors? For me, it was shocking. I kept watching his video and his face — I’m not scared [for] my life, at all, because I know what I’m doing,” Alinejad said. “I have only one life, and I’ve dedicated my life to give voice to Iranian people inside Iran, who bravely go to the street [and] face guns and bullets to protest against Iranian regime.”

She continued, “But this is happening in America! This is happening [a] second time. They tried to assassinate, to kill and kidnap [an] American citizen on U.S. soil. So, I’m not scared of my life, but this is scary, happening in front of the eyes of the whole world, especially the U.S. administration.”

During her time on CNN, the writer also took time to point out the Iranian women who had protested against forced hijab and were silenced for doing so.

“I don’t have any enemy, I’m not a criminal, so of course, this is the Iranian regime,” Alinejad said. “When the U.S. government [does] not take a strong action, of course, they feel more powerful to continue this. I see the pattern, the continuation of oppressing women, oppressing dissidents outside Iran.”

In a message directed to Iran, she concluded, “I wanna tell you…Go to hell! I am not scared of you! I have only one life. You care about power. I care about my dignity and freedom, like millions of other people inside Iran. I’m not scared of you. You can kill me, but you cannot kill the idea, the idea is just fighting for freedom, dignity.”

Watch the full interview below: 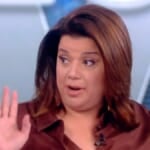 Also Read:
‘The View’ Hosts Mock Brett Kavanaugh for Fleeing Morton’s Steakhouse With Protestors Outside: ‘Let Me Take Out My Little Violin’