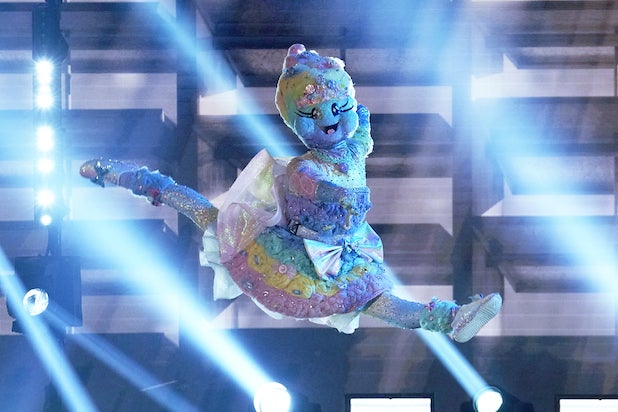 (Warning: This post contains major spoilers for the Season 1 finale of “The Masked Dancer.”)

“The Masked Dancer” crowned Gabby Douglas, aka Cotton Candy, its Season 1 winner Wednesday, a contestant who was a pretty solid bet to take home the gold — er, diamond — trophy heading into the two-hour finale. But as fans probably remember, the gymnast’s time on the Fox dancing competition started off a little rocky after she fell during an early rehearsal.

Since this is the first time TheWrap was able to speak with Cotton Candy about the experience — now that she’s won “The Masked Dancer” and been unmasked — we asked the Olympic gold medalist to break down how she handled that accident, which ended up being a big clue for the judges.

“The ring was spinning really fast and I wanted to just make everything really light and really airy and dramatic, like a beautiful song,” Douglas said. “My left shoulder was supposed to stay in the hoop, but I got out of the hoop and of course the costume has some weight to it, so gravity literally took me. I was honestly, though, fortunate to have the costume on, her skirt and her head, because that’s what really softened the fall. First of all, I checked my teeth to see if they were all fine, because I floss every night and I take care of my teeth and I don’t want any chipped or missing teeth. But honestly, I was fine. I was fortunate to have her costume, because it really padded the fall. And I just got right back up and was like, ‘All right guys, let’s do it again.'”

The way Douglas took that fall and got back up had judges Paula Abdul and Ashley Tisdale both guessing she was a gymnast in their final attempts to figure out her identity on Wednesday’s finale — though Abdul correctly picked Douglas while Tisdale went for Simone Biles. But the fall didn’t even occur to Douglas as something that could give her away.

“I watched the clip multiple times, and I’m so used to falling, and right in the middle I’m like, OK, let’s prepare for landing. I don’t know if I was on the outside if that would ring like, ‘Oh, she knows how to fall like a gymnast,’ per se,” Douglas said. “But I am definitely used to falling in all sorts of good ways. So I think that ended up being the clue for the judges, because who could fall like this? But honestly, I just prepared to land (laughs).“

In second place tonight was Sloth, who was revealed to be “Dancing With the Stars” pro Maksim Chmerkovskiy. But being a pro dancer is the one thing Chmerkovskiy said he didn’t want to be while competing on the Fox series.

“I was like, OK, I’m in — but under one condition,” he told TheWrap. “And they’re like, here we go with Max’s conditions. But my condition was, I want nothing to do with being responsible for myself. I want no responsibility of choreography, I don’t want responsibility of making decisions of where this character goes. I want as close to being told what to do and just doing it as I could get. Obviously I was allowing myself an opportunity to comment, at the very least, on the dances and the steps. But overall, in general, I didn’t want to be my own way. That’s how I felt.”

He continued: “I wanted to experience something from the standpoint of the celebrity signing up and they don’t know that their pro is going crazy or not sleeping 24/7 for three months thinking about their stuff. They just kind of come in, enjoy the process and go out. So I was like, what better project for me to enjoy to the fullest than an opportunity to be a dancer under the mask when they can’t recognize me? There were just so many levels to this, it was amazing.”

The third-place finisher on “Masked Dancer” Season 1 turned out to be “Dance Moms” alum Mackenzie Ziegler. At 16 years old, she was the youngest contestant, which prevented her from even finding out who beat her in the final episode until today.

“I had to leave straight away, right after I got announced. Because I was the youngest one, so I had a pumpkin where I had to be off set,” Ziegler said, referring to the restrictions on how long minors can work on a show. “So every day I would have to go to a hotel just to get off set because it was such a long day. But I’ve been watching the show to see who all the people are because I had no idea. It was so weird for me not knowing anyone that I was competing against because every show that I’ve done, I’m very close with the other contestants. So it was very different, but super fun.”

“The Masked Dancer” is over — for now — but “The Masked Singer” will return next month, airing its Season 5 premiere on Wednesday, March 10 at 8/7c on Fox.