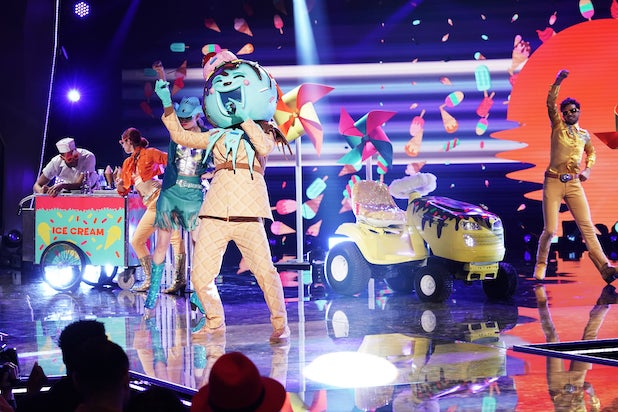 Being the costume designer behind a smash-hit broadcast TV show that was already renewed for Season 3 before its second season even premiered isn’t a situation you’d expect to pose a problem — unless you’re the in-house designer on “The Masked Singer.”

“I’m in the beginning, baby stages of figuring out what to do for Season 3, just because I think we set the bar for ourselves so high for Season 2,” Marina Toybina, the Emmy-winning mastermind behind those insane costumes you’ve seen on Seasons 1 and 2 of “The Masked Singer,” told TheWrap ahead of the show’s second season debut last Wednesday.

The third season of “The Masked Singer” is set to premiere in the highly coveted post-Super Bowl slot on Sunday, Feb. 2 on Fox. So Toybina has a little bit of breathing room — but not much.

“This time around, I’m being very selective even in my own creativity, as to what we can do to make Season 3 even more different,” she said. “How can I bring even more diversity and variety to the show? So of course now I’m experiencing designer block and really taking my time to figure out what inspiration we can bring to the show and, at the same time, noticing what the public is saying about the designs for Season 2 and what people want to see. So I’m really focusing on not just the demographic, but elevating the creative heart of it. I’m still in the baby process, but I think it’s gonna be amazing.”

The 16 contestants competing on Season 2 include The Egg, The Ladybug, The Penguin, The Panda, The Butterfly, The Leopard, The Flamingo, The Skeleton, The Fox, The Eagle, The Ice Cream, The Tree, The Rottweiler, The Black Widow, The Flower and Thingamajig.

During the two-hour premiere last week, eight of the Masked Singers competed in Groups A & B, including Egg and Ice Cream, who were eliminated and revealed to be Olympic figure skater Johnny Weir and professional gamer Tyler “Ninja” Blevins, respectively.

Don’t worry though, because neither of those costumes is Toybina’s favorite.

“I would have to lean towards The Ladybug,” she admitted when we forced her to pick between the 16 costumes she had less than two months to design for Season 2. “It’s been a costume that’s been in mind since Season 1 and we kind of waited for the right moment to create it and there are so many things that went into that particular costume. It’s probably one of my favorites. And out of all 16, it took about five to six weeks to build. So it was definitely something I was very hands-on with and very particular about every little element of designing it. And I’m very excited to see it on stage because it’s so spectacular.”

Toybina told us that she wanted to “elevate the show” in its second season with “richness in detail” and by “really, truly trying to concentrate on these costumes being more like walkable art and having a stage presence.”

But it wasn’t just about making the costumes prettier — they had to be more functional, too.

“Of course for Season 2, we wanted to create a lot more mobility, a lot more freedom for these costumes to live and breathe on stage and not be so stationary,” Toybina said. “The weight and all the details added to the costumes, of course, create a little bit of uncomfortableness on stage.”

She added that this time, “the costumes and the masks are much lighter weight and a lot more mobile and a lot more functioning from the standpoint of being able to see and sing and have airflow into the costume, so they were not dealing with any overheating issues on stage.”