Warning: Spoilers ahead for the season 8 finale of “The Masked Singer”

After weeks of speculation and guessing, fans were proven absolutely correct on Wednesday night, when Amber Riley was revealed as the Harp and crowned the winner of “The Masked Singer” Season 8. And for her, she tells TheWrap that competing on the show was “a bucket list type of thing” — but she really hated that it meant lying to her young niece.

Fans were quick to pick up on Riley’s voice after her first performance on the show, in which she sang P!nk’s “Perfect,” and they were absolutely certain by the time she finished performing Whitney Houston’s “I Have Nothing” during Vegas week. Even Riley’s former “Glee” co-star Kevin McHale got in on the action, posting a TikTok of him reacting to the latter performance.

Though McHale didn’t actually say anything in his video, he cheekily captioned it “check out this brand new singer.” And yes, Riley herself saw that TikTok.

“I did. And I can’t even respond! But boy oh boy, I’m gonna cuss him out,” Riley told TheWrap with a laugh. 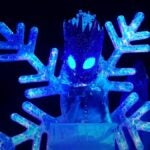 Also Read:
‘The Masked Singer': Snowstorm Is Ready to Pursue a Real Singing Career Thanks to the Show – And Bob Saget

Not being able to respond to people guessing at her appearance on the show was the hardest part for the singer, especially in regards to her family.

“It was so freaking hard. It was so hard,” she said. “Like I had to literally sit and lie. I actually lied! I had to lie to my niece’s face!”

She added with a laugh, “Lying to a child is not fun. But, the thing about, like, my family and specifically, like, my culture, they didn’t really like, ‘Oh, is it you?’ They’re gonna be like, ‘Girl, we know it’s you, stop.’ It wasn’t even a question. So yeah, that was that was pretty tough.”

That said, Riley noted that her niece was understanding about the lies, and reassured her that it was OK. Beyond that struggle, Riley simply enjoyed herself on the show.

“The whole entire time during the show — I don’t think that I’ve anything that has made me that happy, the whole entire time. Like, I was just excited to be there every single day,” she said. “It was so much fun. I can’t even stress how much fun that show is.”

Next up, Riley will return to Fox this winter to compete on the third season of “Celebrity Name That Tune,” premiering on Jan. 11. 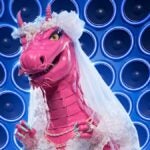 Also Read:
‘The Masked Singer': Bride Is Ready to Join the MCU Thanks to the Show – ‘Like Peter Parker and Spider-Man’
x