“The Masked Singer” aired its Season 1 finale tonight, revealing that the winner of the Golden Mask trophy was the Monster and that the Monster was T-Pain. Oh, and Peacock was Donny Osmund and Bee was Gladys Knight.

We spoke with executive producer Craig Plestis — the mastermind behind Fox’s oddball celebrity singing competition series, which is based on a popular South Korean format — about the big reveals and his big plans for Season 2.

TheWrap: What are your thoughts on who the final three ended up being and why they did the show?

Craig Plestis: Each of them had a reason why they wanted to do it. They all wanted to prove something to themselves and to the world, from Bee to Peacock — but especially Monster, because he was always known throughout his whole career as someone who used autotune and,”‘Oh, you can’t sing, you use autotune all the time.” And when I was presented with him at first as someone to be on the show I thought, “Can he really sing?” And then I did my research and looked around and found a few YouTube clips of him singing a cappella — and he sang like an angel. And it was so beautiful and so great. So I knew, this guy has to be in our show, he has the chops. And that was the deciding factor for us and also for Fox after listening to that — to know that he had it, the ability to be on the show. As well as just the drive, he wanted to prove he can do something. And for people to hear that and not know it was him and then discover, “Yes, I am a singer. I can do this.” 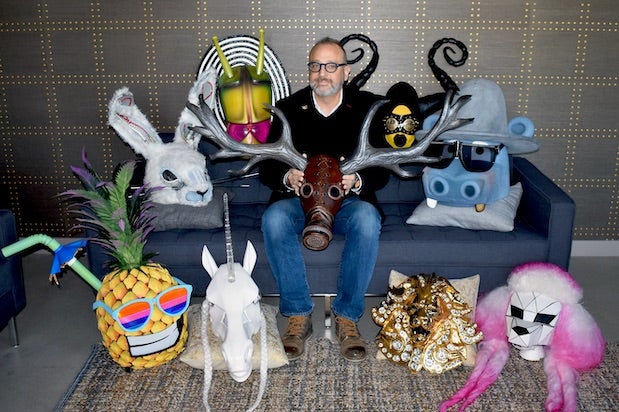 So, T-Pain in particular stood out to you?

He cuts everyone’s heart in his performances and there was just something magical about what he did. And if you saw last week’s episode, his performance there, it was one of the most emotional performances that we’ve had all season. And it’s true that when [panelist] Jenny [McCarthy] said, “I can’t believe this guy in a Monster outfit is making me cry.” We connected so much with these characters, it’s almost painful for them to have to take off their outfits. I want them to keep them on for the rest of their life. The Monster will always be the Monster, not T-Pain.

What’s in store for Season 2?

In Season 2, what we’re gonna do is, you’re gonna see a whole new set of characters. And that’s the exciting part for us, designing the costumes and figuring out what new characters were introducing to America. So we’re in the process right now of figuring that out. And the biggest thing we’re going to do is — it’s such a bizarre show, I can only guarantee you that it will be even more bizarre in Season 2.

We learned don’t play it safe, have fun with it, make people smile and make sure that the guessing game stays alive for everyone. And I think that’s the key here. We always designed the first season as a show that, everyone can play along. If you watched it really closely, all the clues are there. And like any good crime novel, you want to make sure it’s all well laid out and planned out. And we did do that and will do that again in Season 2. We don’t want to make it so difficult that you can’t play along.

Will we see crazier characters, similar to the ones on the original South Korean format?

There’s nothing that’s going to be holding us back in Season 2, absolutely. We’re going to push ourselves creatively and really figure out some additional bizarre creatures to bring forth upon the American landscape. So that’s the exciting part and we’ve already started the internal conversations about that. So all I can say is just watch out.

Where are you in the casting process?

Oh, we’ve started the casting process and we’re very lucky because the success of the show has opened so many doors compared to a first season series. So we’ve had a lot of great reception of people that we’ve talked to and a lot of people that have actually come to us about wanting to be on the show, so that’s a blessing.

I think what you’ll see in the next season is still a list of great credentials from all of our contestants of what they’ve done in their life. We’re really looking for people who have achieved a lot, as well as household names. But we’re also looking for people that are an unexpected singer. When that mask comes off, we really wanna have that, “Oh my gosh it’s them! I can’t believe they can sing.”

Or if it’s a Grammy winner, we really want these people to sing out of their genre. We want to push them to surprise everyone like, “Oh, I can’t believe X can sing country western when I knew them as a pop star.” So I think we’ll be looking for those unexpected from not only music, from TV, from film — but also from politics, from every genre of American culture.

TheWrap: Some viewers at home guessed the identities early on. Are you considering any changes to the format for Season 2 to prevent that?

I’m not at liberty to say exactly the changes we’ll make to the format. But overall, the format worked. People came, it grew, they became invested in it and part of the reason why was giving these clues out in anticipation of — if you thought you knew who Peacock was from Day 1, you just get more and more excited each week to prove that you were right until that Peacock mask came off. It’s that sense of anticipation. And that’s part of the secret there, that you want to be proved right as a guesser. So, when that moment comes and you see that mask being lifted off, it’s almost like an endorphin level because you were right, you guessed it.

So I don’t want to mess with something that isn’t broken, but I do want to improve on it as each season goes.