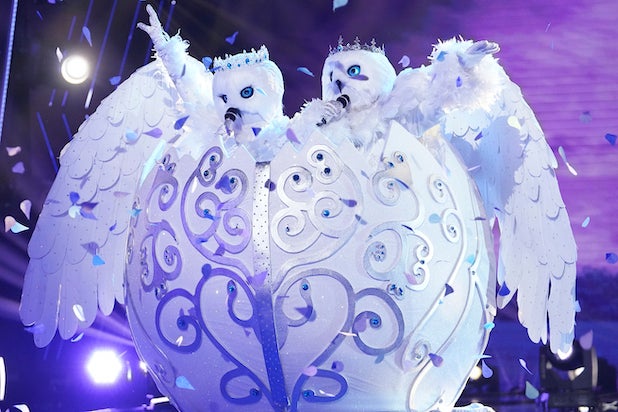 “The Masked Singer” aired the seventh episode of its fourth season Wednesday, which ended with the show’s first-ever two-headed contestant being eliminated and unmasked.

The hour focused on Group A’s finals round, with Sun, Popcorn and the Snow Owls competing.

After those three Season 4 contestants performed, it was time for panelists Jenny McCarthy, Nicole Scherzinger, Ken Jeong and Robin Thicke, and “The Masked Singer” super fans voting from home, to pick their favorite singer to stay. They chose Sun, which meant Popcorn and the Snow Owls had to go head-to-head-to-head in a “smackdown” round to see who would survive.

Also Read: 'The Masked Singer' Season 4 Unmasks Another Contestant: And the Squiggly Monster Is... (Video)

The Snow Owls ended up losing and were unmasked to reveal singer Clint Black and his wife, actress and singer Lisa Hartman Black. During the episode, they performed Andrea Bocelli and Celine Dion’s “The Prayer” as their first song and Celine Dion’s “Because You Loved Me” during the smackdown.

According to Fox, those 16 contestants — but 17 celebrities, because of the Snow Owls — combined “have sold more than 281 million records worldwide, appeared in more than 5,120 episodes of television and 204 films, appeared in five Super Bowls, have four stars on the Hollywood Walk of Fame, one Academy Award nomination, and one of Time Magazine’s 100 Most Influential People.”

Next week, Group B will be back for its finals round. Readers can find out how the format for “The Masked Singer” Season 4 will work over the next few weeks here. And if you want more information on changes implemented due to COVID, you can find that here.

Watch the Snow Owls’ unmasking via the clip below.