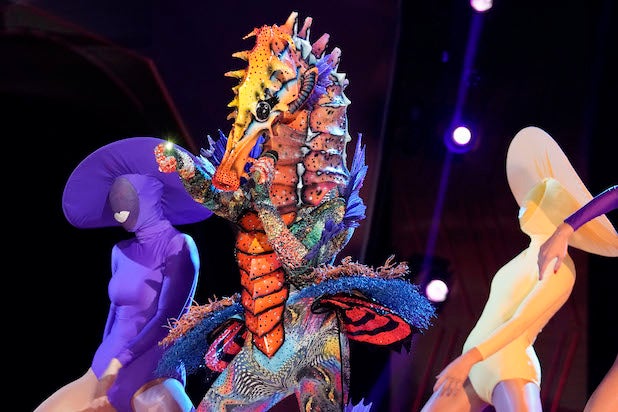 Tori Kelly, a.k.a. Seahorse, says she went to great lengths to trick “The Masked Singer” panelists into thinking she was a different singer by impersonating other artists during her performances on the Fox singing competition.

“I think I definitely felt like, because I am a singer already and have music out there, I took that as an opportunity to do vocal impressions,” the Grammy winner told TheWrap. “I’ve always just loved doing it for some reason. And I thought this was a cool opportunity to show those little impressions, even if it’s just for a moment or two, just to try to stump people a little bit.”

By the end of tonight’s “Super Six” semifinals episode, two of the panelists (and guest judge Craig Robinson) had correctly identified Kelly as the Seahorse before her unmasking, and they were the two she was trying the hardest to fool.

Also Read: 'The Masked Dancer' Will Let Judges Hear Contestants' Voices So It's Not All Totally Impossible

“The two singers [on the panel of judges] actually ended up guessing me, Robin Thicke and Nicole Scherzinger, which was really funny because they were my mission, to try and stump them,” Kelly said. “I’ve actually sang with both of them before at different times so I was like, ‘I’m going to try to throw them off.’ And I did — right till the very end, they didn’t know who I was, so that was fun.”

Kelly did manage to fool Jenny McCarthy and Ken Jeong — who guessed Halsey and Christina Aguilera, respectively — but the “Never Alone” singer is well aware that her “vocal impressions” trick didn’t work on her followers.

“Still didn’t stump my fans, because they know all of my impressions,” she said. “But I think it worked on the panel and maybe for some of the people watching. But moments like the Britney Spears song… all the song choices were very particular because I wanted to show different styles of my voice that people might not be used to hearing.”

Also Read: Serpent Talks Being the First Non-Celebrity to Compete on 'The Masked Singer'

Throughout her appearance on Season 4 of “The Masked Singer,” Kelly performed these songs as Seahorse: “Only Girl (In the World)” by Rihanna, “My Heart Will Go On” by Celine Dion, and “…Baby One More Time” by Britney Spears.

Kelly says she wasn’t sure if competing on the hit Fox series was the right fit for her at first, but ultimately decided to take the network up on their offer because she wanted to show a “different side” of herself.

“They approached me and asked if I would do it this season,” Kelly said. “I had seen the show before, I thought it was a really fun, wild show. I never thought of myself as doing it, but this year I had to kind of think about it, to be honest. I didn’t jump right away at the opportunity because I just didn’t know what I would do on the show.”

She continued, “The more I thought about it, I realized it could be a really cool opportunity to branch out of my comfort zone. I have a feeling that’s why many people do the show, to show a different side of them. And for me, it was showing that more confident side because people are probably used to seeing me with a guitar in front of me and I’m a little more on the shy side, I’ve always been, as a kid too. So for me, it was a cool opportunity to do something way out of my comfort zone and it started to sound really appealing.”