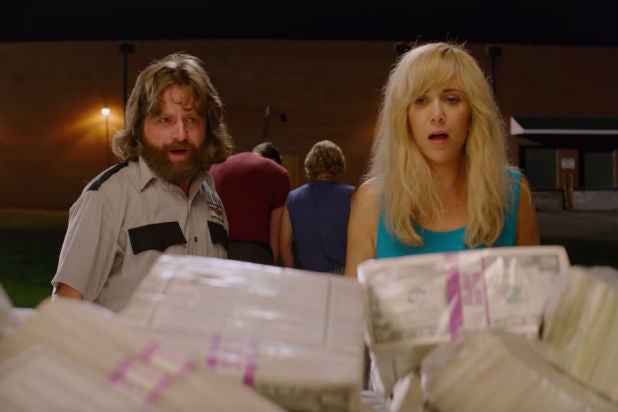 After a long delay following its original August 2015 release date (due to its distributor Relativity Media’s bankruptcy woes), “Masterminds” finally landed in theaters over the weekend … with a thud.

The soft $6.6 million start for bank-robbery comedy starring Zach Galifianakis, Owen Wilson and Kristen Wiig may have proven detrimental, as it coincided with Monday’s news that Relativity is now up for sale (as first reported by The Hollywood Reporter).

Dana Brunetti, president of Relativity’s motion picture and TV group, will stay on as part of the sale, according to the report, but its unclear whether CEO Ryan Kavanaugh will remain.

Now that the dust is settling, it is painfully apparent that “Masterminds” has no shot at the $125 million in lifetime grosses the company boldly predicted in its Chapter 11 filings.

What’s more, the comedy’s opening grosses are a small fraction of the $25 million spent on producing the film. And that’s not counting marketing costs, which are thought to have exceeded $20 million, as lifetime TV ad spending alone  was estimated at $18.4 million (according to Variety).

The bottom line: “Masterminds” needs to make something in the ballpark of at least $50 million just to get into the black.

Adding insult to injury, the studio’s only other post-bankruptcy movie is also losing money. Kate Beckinsale horror outing, “The Disappointments Room,” has grossed only $2.4 million after three weeks in theaters — and that’s off a reported $15 million production.

“I do not know anyone other than that judge who approved their plan who believed they stand a chance post-bankruptcy,” a Hollywood executive who spoke to TheWrap on condition of anonymity said.

Micro-budgeted scary sequel “Strangers 2” is the first Relativity film set to enter production following the studio’s Chapter 11 drama. After that, a SWAT team-themed sequel “Act of Valor 2” is in the hopper along with the long-in-the-works reboot of “The Crow,” starring Jason Momoa. The studio also has plans to remake of the 1952 Gary Cooper Western “High Noon” as well as a movie centered on a Marine and his ailing dog.

Of course, now that Relativity is up for sale, those future plans may be in limbo. (TheWrap has reached out to Relativity several times, but they chose not to comment on the record in time for the publishing of this article.)

Their slate as it stood pre-sale is a risky bet, argued Jeff Bock, senior analyst at Exhibitor Relations.

“Their entire post-bankruptcy slate is chock full of films even the likes of Ed Wood wouldn’t put his name on,” Bock told TheWrap. “Sequels and reboots are getting to be tougher and tougher sells of late,” he added.

Kavanaugh was said to have been successful in raising the $100 million required to lift his company out of bankruptcy. In fact, he has reportedly raised more than double that amount with the help of Chicago-based hedge fund billionaire Joseph Nicholas.

But that wasn’t enough to cover its losses, as last July, the 12-year-old company reported assets of $560 million and liabilities of nearly $1.2 billion in its bankruptcy filing.

Relativity got its start producing and/or structuring the financing for hits and Oscar winners including 2007’s “Atonement” and “American Gangster,” 2010’s “The Social Network” and “The Fighter,” four “Fast & Furious” films, including the 2015 mega-hit “Furious 7,” and 2013 hit comedy “Identity Thief.”

But since branching into distribution five years ago, the company has struggled. Total grosses are just shy of $950 million from a whopping 36 Relativity titles that have opened in theaters — most of them wide releases playing on 2,000 screens or more.

During that same period, The Weinstein Company grossed in excess of $1.5 billion domestically. While TWC released many more movies — 79 — roughly two-thirds of its slate was made up of limited art-house releases.

“Dana Brunetti certainly has his back against the wall,” Bock said.