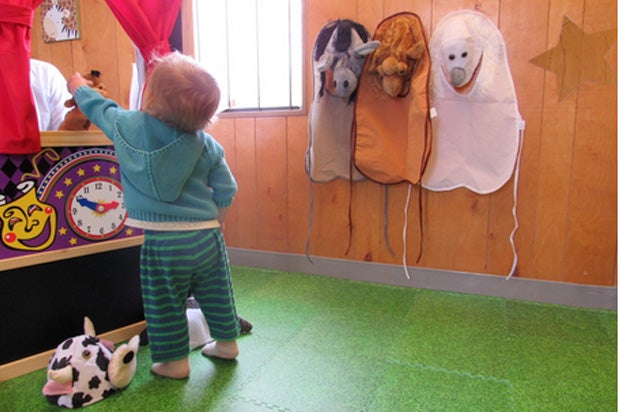 Child care, or the lack of it, has increasingly been a part of public discourse in the American workforce. The situation is particularly acute for young mothers in Hollywood, where careers are notoriously unstable and often freelance in nature.

The discussion around maternity leave and child care is much more prevalent now than it has been in the past; the Writers Guild of America, for instance, is currently putting pressure on production companies to provide an industry-wide family leave policy.

But with progress slow to catch up with the needs of workers in the industry, women who actively work in freelance fields find ways to make it work — some of them obvious, and some much more creative.

“I started a fake management company, because I knew I would need some kind of income if I couldn’t work for awhile,” said actor Rene Ashton. “Actors aren’t supposed to be agents or managers, so I used a fake name. I had a business representing actors and I actually did pretty well at it — I ended up doing it for six years! It gave me a lot of flexibility with a newborn at home. But it was a 24-hour job. I remember I was about to give birth and taking calls and making appointments,” she said.

After giving birth, Rene continued to push on with her acting career, with or without any available resources.

“I started working right away and I would bring my daughter with me. I don’t know if you’re supposed to or not, but I didn’t care, because I needed to work,” she said. “So I would just bring her. There’s a community of actors that you build over the years, so I would just ask people to hold her when I went in. Or, if it was a car commercial, for example: Any mom could be buying a car with a baby on her hip, so I would take her in with me, and she ended up getting six or seven commercials before she could even speak. They’d say ‘Oh, can your kid work with you?’ and I’d say ‘Oh, sure, yeah,’ as if I didn’t plan it.”

Though it was mostly a positive experience, bringing her daughter with her on auditions did create the occasional complication.

“Once I was at a callback, so the producers and clients from the ad agency were in the room,” she said. “I could hear my baby crying out in the lobby and my breasts started filling with milk and my shirt was getting wetter and wetter, and finally I said, ‘I have to go outside, I’ll be back!'”

Funny stories aside, the issue of having kids in tow is still a very real one. “It needs to be acceptable to bring a child to set,” Rene said, noting that while may studios provide day care to employees, “As an actor, you don’t get to use that service.”

Writer/director Mathilde Dratwa and producer/actor Christy Park agree. Both were actively working in the industry — Mathilde in New York and Christy in Los Angeles — when each decided to embark on parenthood for the first time.

Christy was five months pregnant when she moved to Los Angeles from New York, and immediately found herself at a crossroads in her career. “My day rate for producing wasn’t going to cover child care,” Christy said. “I’ve had an interesting time of it. I remember saying it would be hard for me to figure out what I’m going to be after I had the baby, because I felt like I was going to be a different person.”

Meanwhile, Mathilde was going through similar experiences as new mom. “I had my little boy and my worst fears were confirmed when my son was born and I realized it was incredibly difficult to juggle motherhood and filmmaking,” she said.

After reading Mathilde’s blog post about her struggles, Christy reached out and the two decided to launch a nonprofit, Moms in Film, to tackle the issue.

“In the middle of the night I read Matilde’s writing and contacted her and said, ‘This is really resonating with me, I don’t know what I’m doing next, and I want to know if you want to make this bicoastal,'” Christy said.

For Mathilde, who was born and raised in Belgium, the lack of resources in the United States was particularly striking. “In Belgium you get paid maternity leave no matter what, and there are provisions in place if you’re a freelancer,” she said. “There’s all kinds of child care services available that are affordable or free, all things that are not available here.”

At SXSW this year, Mathilde and Christy launched a mobile child care unit called the Wee Wagon — accessible to mothers and fathers — after winning the 2017 SXSW Community Grant.

“The Wee Wagon idea stood out as a great advocacy tool and a practical solution, and something we could apply to festivals as well as on sets,” Mathilde said. “We were already applying to SXSW to present a panel on parenthood and filmmaking, and through that process we learned about the $10,000 grant to community driven projects. So we thought, ‘What better place to launch it than at SXSW?'”

“We showed it was possible, when a lot of people didn’t think it was,” Mathilde says. “Now we want to get this onto productions.”

It may sound simple, but just having child care available nearby can make all the difference when it comes to supporting parents in the industry — and keeping women in the workforce after having kids.

“There is a push right now to hire women, but a lot of that is happening with women under 30,” Mathilde said. “What we’re seeing is the rates of women over 30 and over 40 working in the industry are very low, so if we want to get these women back in the industry after they’ve dropped out to have a baby, then we need to provide for them. As filmmakers, we’re very accommodating — if someone is right for the job, we make it work, even if there are certain specifics to be taken care of.”

Fortunately, those who support working parents in the industry are speaking out more and more.

“Something right now is shifting in terms of women’s advocacy and child care being a part of the broader conversation,” Mathilde said. “At Tribeca this year, one of the award winners accepted her award with her 6-month-old baby on stage, and another accepted the award via video call from the hospital, having given birth the day before.”

“Women who were not able to claim motherhood as publicly and vocally as they would have liked are now claiming it and saying ‘I’m a filmmaker and a mom and I need to talk about it so that others know it’s possible too,'” she said.

View In Gallery
BIO Jessica Hobbs
Jessica Hobbs is a writer from Durango, Colorado. After spending nearly four years in Denver working in reality TV as a writer's assistant, postproduction coordinator, and associate producer, she moved to Los Angeles to work at the Sundance Institute. In 2015, she wrote, produced, and directed her first short film, "Jeremy." She is currently producing a feature-length comedy she co-wrote, "Amy Gets Her Man," which will shoot in August 2017. Two web series, "Green Eggs in Hell" and "The Rosé Divorcée," are also in the works.

Jessica Hobbs is a writer from Durango, Colorado. After spending nearly four years in Denver working in reality TV as a writer's assistant, postproduction coordinator, and associate producer, she moved to Los Angeles to work at the Sundance Institute. In 2015, she wrote, produced, and directed her first short film, "Jeremy." She is currently producing a feature-length comedy she co-wrote, "Amy Gets Her Man," which will shoot in August 2017. Two web series, "Green Eggs in Hell" and "The Rosé Divorcée," are also in the works.