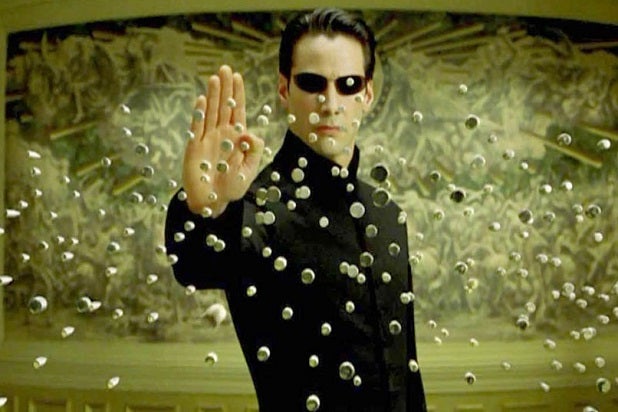 Warner Bros. is halting the 2021 release of the highly-anticipated fourth “The Matrix” film, pushing it to Spring 2022.

The move comes as Hollywood studios have been forced to shift their release schedules after theaters shutdown due to the coronavirus pandemic.

Lana Wachowski is set to direct the film, and she will also produce the film along with Grant Hill. Wachowski is writing the screenplay for “The Matrix” sequel with Aleksandar Hemon and David Mitchell. Warner Bros. and Village Roadshow Pictures will produce and distribute globally.

Details are being kept under wraps, but the still-untitled sequel would continue from the original “Matrix” trilogy. The film was initially supposed to hit theaters in May 2021.

In addition to pushing the “Matrix” sequel, Warner Bros. removed the Anne Hathaway-led “Witches” remake from the release schedule. The film was set to hit theaters in October 2020.

Hathaway will star as the Grand High Witch, which was played by Anjelica Huston in the first adaptation of the children’s book in 1990. Robert Zemeckis is directing and writing the script based on the book about a boy who stumbles across a coven of child-hating witches who secretly inhabit the world and is forced to stop them even after he’s been transformed into a mouse.

Warner Bros. shuffled around a good deal of its coming schedule on Friday, also moving “Godzilla vs. Kong” to May 2021 — “The Matrix” sequel’s previous spot. The studio also moved “Tom & Jerry” to March 2021 from its December 2020 release date.

The studio’s New Line banner scheduled an untitled horror flick to be released in June 2021, and Warner Bros. removed an untitled “event movie” that was supposed to come out in October 2020 from the schedule entirely.

Since theaters were forced to close their doors in mid-March, as studios scrambled to pull and push releases, Warner Bros. “Tenet” has continued to be touted as the film that would reignite a beleaguered movie business.

“We’re especially thrilled, in this complex and rapidly changing environment, to be bringing Christopher Nolan’s ‘Tenet,’ a global tentpole of jaw-dropping size, scope and scale, to theaters around the world on July 31,” Toby Emmerich, chairman, Warner Bros. Pictures Group, said in a statement. “It’s been longer than any of us could’ve imagined since we’ve seen a movie on the big screen, and to acknowledge Chris’ fans as we count down to ‘Tenet”s opening day, we are also excited to offer his masterpiece ‘Inception’ in theaters for its 10th anniversary on July 17.”