Matt Damon had the last laugh over Jimmy Kimmel on Sunday night when his Boston Red Sox beat the L.A. Dodgers in Game 5 of the World Series.

The pair sat next to each other in the stands at Dodger Stadium wearing matching “I’m with stupid” shirts, with Boston native Damon in red and Los Angeles-resident Kimmel in blue.

The late-night host and the “Bourne Identity” star have had a long-running fake feud that has spread from the set of “Jimmy Kimmel Live!” to the Oscars and “SNL.”

Kimmel most recently trolled Damon on his 48th birthday as he told his viewers the actor was turning 60.

“This year for his birthday, Matt wished for the same thing he wishes for every birthday — talent,” Kimmel said during his opening monologue earlier this month. “Sorry buddy, maybe next year.”

“I feel bad because I know he’s probably at home blowing out candles by himself,” he added.

Kimmel and Damon were joined by fellow Bostonians Ben Affleck and Bill Simmons on Sunday night, with Simmons joking that they were working on “Good Will Hunting 2.”

“Instead of seeing about a girl, Will sees his fourth World Series title in 15 years,” The Ringer founder wrote on Instagram.

Tentative plot for Good Will Hunting 2: Instead of seeing about a girl, Will sees his fourth World Series title in 15 years.

Dodgers Stadium was packed with high-power stars on Sunday to witness the culmination of the 2018 MLB season. Jason Batemen, Kobe Bryant, Billy Cudrup, Magic Johnson, Jennifer Garner, Charlize Theron and Rob Lowe were all spotted in the crowd. 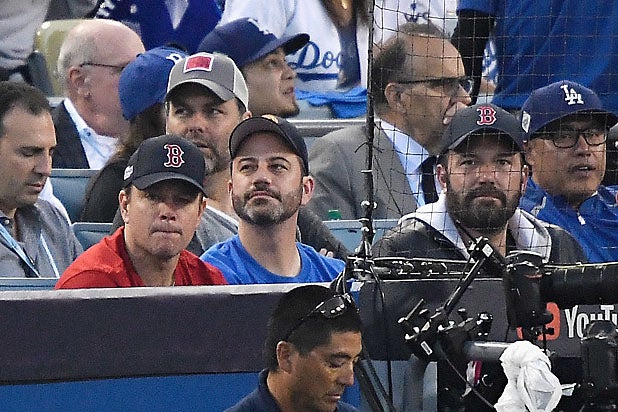 Powered by a dominant performance by David Price, who pitched into the seventh inning of Game 5, and clutch hitting from first baseman Steve Pearce, the Red Sox won the series in five games. Chris Sale stuck out Dodgers shortstop Manny Machado to clinch the series.

The Red Sox rebounded from losing a marathon 18-inning game on Friday night that bled into Saturday morning, by winning the next two games to capture the Commissioner’s Trophy. Pearce, a late-season acquisition from Toronto, was named World Series MVP.

Red Sox manager Alex Cora — who won a World Series title as a player in Boston — joins John Farrell and Terry Francona to win the championship since the team famously broke the “Curse of the Bambino” in 2004. Coincidentally, Cora, Farrell and Francona all won a title in their first year on the job.