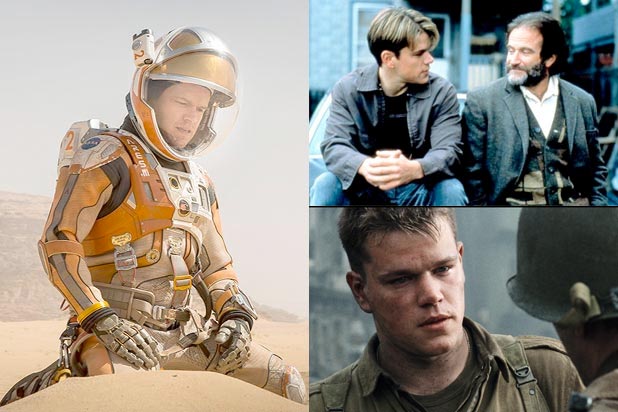 With Matt Damon‘s “The Martian” science-ing the shit out of the box office this weekend, it’s time for TheWrap to examine the actor’s highly-quotable movie career.

After “Good Will Hunting” catapulted him to stardom in 1997, Damon went on to star in two blockbuster franchises — the Jason Bourne trilogy and the Ocean’s trilogy — which grossed $2 billion worldwide between them. However, as popular as those films are, no single line of Damon’s dialogue from either franchise stood out.

In fact, the toughest omissions from this list came from Damon’s wonderful turns as Scott Thorson in Steven Soderbergh‘s HBO movie “Behind the Candelabra” and as Loki, the Angel of Death, in Kevin Smith‘s “Dogma.” We also had to cut some funny lawyer jokes from Francis Ford Coppola‘s John Grisham adaptation “The Rainmaker” and some rousing speeches from his Oscar-nominated turn in Clint Eastwood‘s “Invictus.”

Without further ado, here are TheWrap‘s 10 favorite movie quotes from Matt Damon‘s career. If there’s a line we missed, let us know in the comments section below along with your own favorite quote.

Apparently, no one writes for Matt Damon better than Matt Damon, who won an Oscar along with co-star Ben Affleck for this highly-quotable drama about a math genius and his relationship with a therapist, played by Robin Williams in an Oscar-winning performance. There’s really no argument about the top choice on this list, though we had to call a tie thanks to the film’s classic penultimate line.

And in case you’ve never seen the faux-sequel “Good Will Hunting 2: Hunting Season,” here’s a related bonus video from “Jay and Silent Bob Strike Back.” Enjoy the applesauce, bitch!

2. THE TALENTED MR. RIPLEY – “I always thought it’d be better, to be a fake somebody… than a real nobody.”

Damon’s performance as a closeted psychopath in Anthony Minghella’s adaptation of Patricia Highsmith‘s novel is pitch-perfect, and so is his reading of this line, which illustrates the character’s complex pathology. Too many people seem to have forgotten how wonderful Damon is in this movie.

3. ROUNDERS – “Listen, here’s the thing. If you can’t spot the sucker in your first half-hour at the table, then you are the sucker.”

The dialogue in David Levien and Brian Koppelman’s screenplay for “Rounders” is so great that Bill Simmons once wrote an entire NBA column taking its cues from the film’s standout lines. In fact, Simmons asks of our choice, “Man, is there a better line than that?” and wishes he could go back in time to make it his high school yearbook quote. Enough said, am I right?

4. THE DEPARTED – “What is this, a citizens arrest? Blow me, alright. Only one of us is a cop here, Bill. You understand that, Bill? No one knows who you fucking are! [Will you shut the fuck up!] I’m a sergeant in the Massachusetts State Police, who the fuck are you? I erased you! [You erased me, huh?] Yeah, go ahead. Shoot a cop, Einstein. Watch what happens!”

I know what you’re thinking and I get it. This one was hard. There are a million lines you could choose from William Monahan‘s script for “The Departed,” which won an Oscar for its tough-guy talk. But in the end, we kept coming back to, well, the end. Watching Damon go at it with Leonardo DiCaprio is movie poetry. And Damon is always a delight when he gets to bust out his native Boston accent.

5. SAVING PRIVATE RYAN – “It doesn’t make any sense, sir. Why? Why do I deserve to go? Why not any of these guys? They all fought just as hard as me. [Is that what they’re supposed to tell your mother, when they send her another folded American flag?] Tell her that when you found me, I was here, and I was with the only brothers that I have left, and that there was no way I was gonna desert them. I think she’ll understand that. There’s no way I’m leaving this bridge.”

Even we forget that Matt Damon was in Steven Spielberg‘s classic war movie even though he plays the title character! This speech, about Private Ryan refusing to leave his saviors behind for the next chopper home, was quite moving and further evidence of Damon’s growing talent as an actor.

20th Century Fox’s marketing team knows what it’s doing, because both of these tasty bon mots were in the film’s first trailer. Always a thoughtful and cerebral actor, Damon radiates good old-fashioned movie star charisma as an astronaut stranded alone on mars. Lines like these are the stuff that hit blockbusters are made of.

This comedic crime film from 2009 offers Damon one of his best roles, and it’s possible that no director got more out of the versatile actor than Steven Soderbergh. Damon’s whistleblower narrates the film from the first-person POV and it’s a charming performance that perfectly navigates what could’ve been a very tricky tone in the hands of a lesser artist.

8. WE BOUGHT A ZOO – “You know, sometimes all you need is 20 seconds of insane courage. Just, literally, 20 seconds of just, embarrassing bravery. And I promise you, something great will come of it.”

No, it’s not from Damon’s early turn in “Courage Under Fire.” It’s a heartfelt from Cameron Crowe‘s underrated family dramedy, which may be why it brings a tear to your eye. Speaking of eyes…

Damon brings a hard-nosed comic energy to his role as LaBoeuf, the Texas Ranger who helps bounty hunter Rooster Cogburn (Jeff Bridges) and young Mattie Ross (Hailee Steinfeld) track down Tom Chaney in the Coen brothers’ remake of the classic Western. He’s able to both diffuse tension with jokes like this one, as well as ratchet it up with his Colt Peacemaker.

This low-brow but surprisingly touching Farrelly brothers comedy may not measure up to “Dumb & Dumber” or “There’s Something About Mary,” but how can you not fall for a line like this? Damon and Greg Kinnear star as conjoined twins and have delightful comedic chemistry together. Yes, we ignored all that crap about fate and free will that Damon recited in “The Adjustment Bureau” in favor of this line. Sorry, “Interstellar!”

Stuck On You – Clip – We’re not Siamese! by MyMovies_International

Did you think we would forget about these? There’s nothing more entertaining that Matt Damon singing… even when he’s not.